The government on Tuesday launched an exclusive web portal dedicated to tracking down missing children. The website called "Khoya-Paya" aims to help trace missing children by allowing citizens to post information about a child who is not to be found. 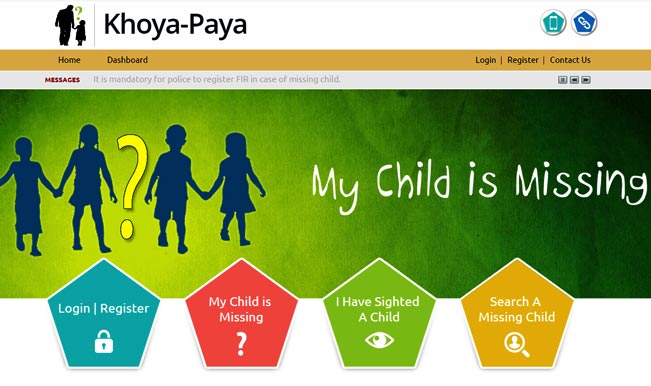 New Delhi, June 2: The government on Tuesday launched an exclusive web portal dedicated to tracking down missing children. The website called “Khoya-Paya” aims to help trace missing children by allowing citizens to post information about a child who is not to be found. Simultaneously, anybody who has seen a child alone or with suspicious people can post information or photographs of the child on the portal. Also Read - Brain Dead Gujarat Toddler Gives New Lease of Life to 5 Children After Parents Donate His Organs

Information about missing and sighted children can be uploaded at khoyapaya.gov.in. The portal is also available as a mobile application. “This website would be different from the website called ‘track child’ which is at present being maintained by the home ministry,” Women and Child Development Minister Maneka Gandhi said at the launch of the web portal here. “The plan originated from the prime minister,” she said. Also Read - Fast Walking in Narrow Corridors Can Increase Risk of Covid-19 Transmission, Especially in Kids

Communications and IT Minister Ravi Shankar Prasad said the portal was a step towards the government’s vision of bridging the digital divide. “This website is likely to benefit the poor and under-privileged sections more,” he said. Gandhi said the website was an enabling platform, where citizens can report missing children, as well as sightings of their whereabouts without wasting much time.

Found children can also be reported on the portal. Citizens can also provide information about abandoned, lost children and those sighted with suspicious people. Through this portal, they are also advised to inform the nearest police station. Officials of the women and child development ministry, however, clarified that putting up information on the portal was not a replacement for filing an FIR with police. As per information provided by the National Crime Records Bureau, the number of children who go missing every year is about 70,000.