K Suresh, the working president of the Kerala Pradesh Congress Committee, said that the party was under 'tremendous pressure' as IUML and CPI-Left MPs had already visited the areas.

New Delhi: Even as a delegation of Congress leaders, led by former president Rahul Gandhi, on Wednesday visited riot-hit areas in northeast Delhi, a party leader today said that the visit was undertaken as ‘we were under tremendous pressure from our constituencies.’Also Read - 'Centre Creating Panic on Coronavirus to Divert Attention From Delhi Violence,' Alleges Mamata Banerjee

“So we were under tremendous pressure from our constituencies,” he added.

#WATCH Congress leader K Suresh on Congress delegation visiting northeast Delhi: Congress MPs had so far not visited the riot-affected areas but IUML and CPI-Left MPs had visited, so we were under tremendous pressure from our constituencies. pic.twitter.com/hFPPSX7smD

Notably, the BJP, the ruling party at the Centre has frequently accused the Congress of ‘Muslim appeasement.’ Most of the areas in northeast Delhi, where rioting took place, are Muslim-dominated localities.

The delegation first arrived at Brijpuri where, speaking to media after visiting a school, Rahul said, “This school is the future of Delhi. Hate and violence have destroyed it.”

“This violence is of no benefit to Bharat Mata. Everybody has to work in together and take India forward at this time,” he further said. 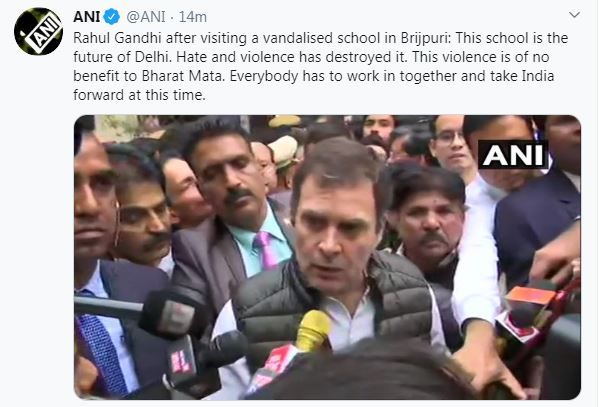 The violence, which was the capital’s bloodiest in nearly four decades, initially began as a clash between pro- and anti-CAA protesters at Maujpur on February 23. A day later, however, it turned communal and continued till Tuesday night.