New Delhi: The crime branch of the Mumbai Police has detained a few persons after a Facebook post wishing India’s most wanted gangster Dawood Ibrahim on December 26 drew their attention. The Facebook post, shared by someone who identified himself as ‘Shera Chikna’ had some photos of Dawood and the photo of a cake. It also mentioned the location as ‘dongri the legend of Mumbai’. Dongri was Dawood’s den.

Dawood is wanted on the charges of murder, extortion, drug trafficking, terrorism. He was designated as a global terrorist by India and the United States in 2003 for his role in the 1993 Mumbai blasts. The 64-year-old gangster is believed to be hiding in Pakistan. 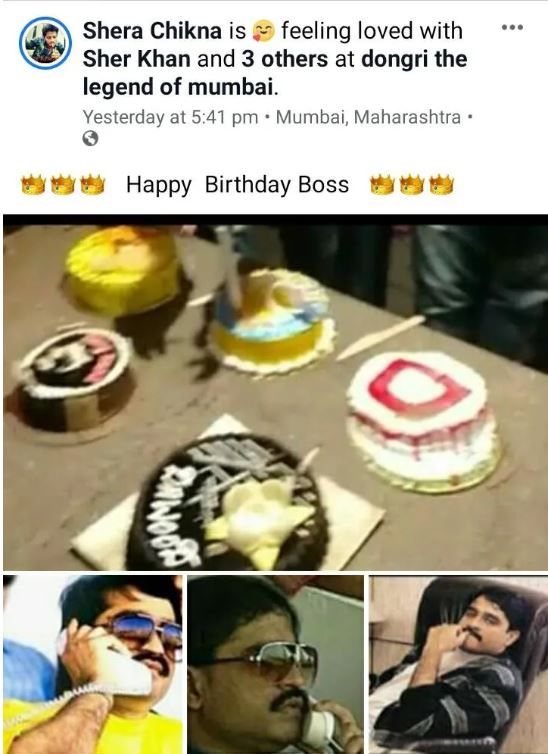 The Facebook post is not available as the profile has also been taken off. A journalist was allegedly threatened by Shera Chikna after he circulated a video showing the celebration. Mohsin Sheikh, who works with a local newspaper and runs a YouTube channel, lodged a complaint against Shera Chikna at Goregaon police station on Friday. Sheikh came across the video, and uploaded it on his YouTube channel and also forwarded it on several WhatsApp groups. When Chikna learnt this, he allegedly called Sheikh and threatened him.

Where is Dawood? Silent on Phone But Still Operating From Karachi

Dawood’s last phone call, according to an IANS report, was intercepted by the Delhi Police in November 2016. The phone call, recorded for 15 minutes, was intercepted by Delhi Police sleuths after placing a Karachi based number, provided by the central agencies, under surveillance. “He (Dawood) seemed to be drunk as in between the conversation, his voice slurred for some moments. The conversation was more or less of a personal nature and had no reference to any underworld activity or operation,” said an IPS officer of the Delhi Police.

Earlier around 2014-15, Indian agencies had laid their hands on Dawood’s series of telephonic conversations where he was discussing land deals in Dubai with his aide Javed and one other acquaintance. Sources said that Dawood had been calling from his Karachi number to his aides in Dubai. Indian agencies were helped by the western intelligence agencies in procuring the D-tapes which were later leaked to a section of media.

This has led to speculation whether India’s Most Wanted is suffering from failing health. There was talk that he had a heart ailment and was even hospitalised in Karachi itself, but his brother Anis Ibrahim had vehemently denied it.