‘Will Request Centre to Bring Law to Shoot Those Who Abuse India,’ Says Karnataka Minister Amid ‘Goli Maaro’ Row

BC Patil, the state agriculture minister, said that it has become a fashion for some youths to become popular by raising anti-India slogans. Last week too, he had made a similar demand.

New Delhi: Amid nationwide outrage over BJP leaders and supporters chanting the slogan ‘desh ke gaddaron ko, goli maro s****n ko‘ (shoot those who betray the nation), Karnataka minister BC Patil on Monday said that he would, in fact, ask the Centre to bring in a law to shoot at sight those who raise slogans against the country. Also Read - Won't Tolerate ‘Goli Maaro…’ Slogans in West Bengal, Says Mamata; Calls Delhi Violence a 'Planned Genocide'

He was, however, only reiterating a demand that he made last week that a shoot at sight law was ‘extremely necessary.’ “They enjoy food, water and air of India. Why should they be here if they raise ‘Pakistan zindabad’ slogan? In China, people are scared to talk against their country,” the minister had remarked. Also Read - ‘Goli Maaro’ Slogans Raised at Delhi's Rajiv Chowk Metro Station, 6 Youths Detained | Watch

Today, while talking to reporters in Bengaluru, he said, ” I will ask the central government to bring a law to shoot at sight those who shout slogans against India.” Also Read - 'How Can Anurag Thakur Still Hold Office,' Hits Out Mamata Banerjee After His 'Goli Maaro' Remark

“Nowadays it has become a fashion for some youths to get popularity this way which spoils the country and patriotism,” he added. 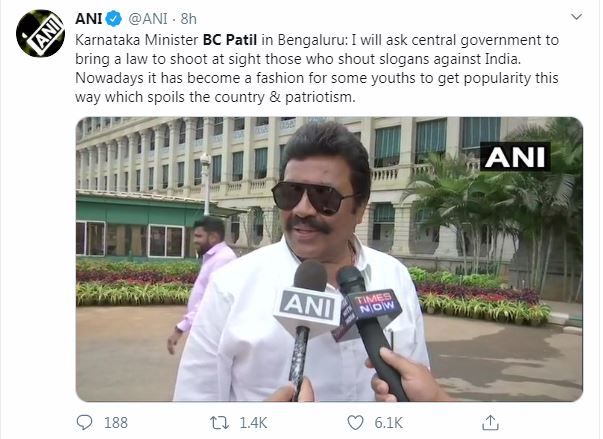 The slogan was first used by Union Minister Anurag Thakur in the run-up to the Delhi Assembly Election. It was later picked up by a host of BJP leaders, including UP CM Yogi Adityanath, in their poll rallies. In recent days, however, the slogan has been raised by those taking out counter-rallies against the anti-Citizenship Amendment Act (CAA) protesters, including by a group at Rajiv Chowk, the busiest station on the Delhi Metro network.

The ‘goli maaro‘ slogan was also raised by BJP supporters ahead of Union Home Minister Amit Shah’s rally in Kolkata on Sunday. Three BJP workers have been arrested for raising the slogan.