The VHP claimed that young people from both sexes came to these rafting camps, ‘mingle, drink and indulge in objectionable activities on the banks of the holy river'! 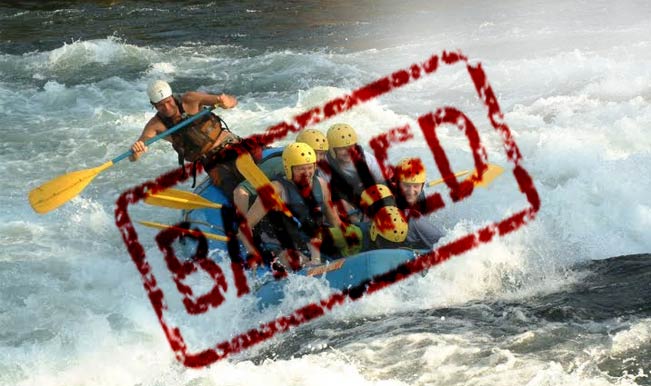 It seems like the right wing will stop at nothing until there’s nothing remotely entertaining left in this country. I mean come on guys, just because no one wants to have fun with you doesn’t mean you ban every fun thing in the world!  After demanding bans on Valentine’s Day, beef, documentaries, cussing in movies and normal history, the VHP wants to ban rafting in the Ganga because apparently having fun is a crime! Earlier another member of the right-saffron fringe, Sri Ram Sene leader Pramod Mutalik, demanded a ban on Sunny Leone because her videos were apparently responsible for rape, kidnapping and murder.Also Read - Do You Know About The Unheard Tales Of Wari Chora Village In Meghalaya? See Spectacular Images

The VHP claimed that river rafting; Uttarakhand’s most popular draw for tourists from across the world should be shelved because it gives rise to ‘obscene activities’. The VHP claimed that young people from both sexes came to these rafting camps, ‘mingle, drink and indulge in objectionable activities on the banks of the holy river, where sadhus and sants gather to meditate’. Rafting in Rishikesh draws over 4,00,000 tourists every year and earns the tourism department Rs 16 lakh annually. According to some, this is just the tip of the ice-berg and unofficial rafting companies earn three times this amount. The VHP also adopted a resolution to save the holy river and also demanded enactment of more stringent laws to ban cow slaughter across the country. They also told their supporters that they should persevere with the Modi government, which is moving in the right direction. Also Read - Woman Loses iPhone Worth Rs 65,000 in Rishikesh, Uttarakhand Police Helps Find It

VHP international general secretary Champat Rai told TOI, ‘At the valedictory session, the issue of Ram Temple came up for discussion. Krishnacharya (Rishikesh), Dharma Das (Ayodhya), Vivekanand (Meerut) and Govind Giri (Pune) were among those who spoke. They asserted that the Union government is moving in the right direction and there is nothing to warrant impatience of any kind.’ Also Read - IRCTC Latest News: India Railways to Start Swadesh Darshan Special Train From Madhya Pradesh Soon. Check Ticket Fare, Itinerary Details

India – the land of bans!

If there’s one thing that we will forever associate with this government, it’s an unprecedented trigger happy approach to banning stuff! Till now we have had beef banned in several states because, despite we like it or not, our mother is a four-legged animal and we can’t eat her. And lest we forget, homosexuality is still banned in India while marital rape is still not a crime!

We also had a new Censor Board Central Board for Film Certification which has decided that no matter how bad real life is, reel life will be utopia. This means that there will be no cuss words in movies, a move that might have forced Anurag Kashyap to move to Paris (okay I am just speculation but isn’t that what most entertainment journalists do?)  This high-handedness also saw a spate of FIRs against comedy group All India Bakchod, because god forbid that people are smart enough to make their own choices without telling them what to do!