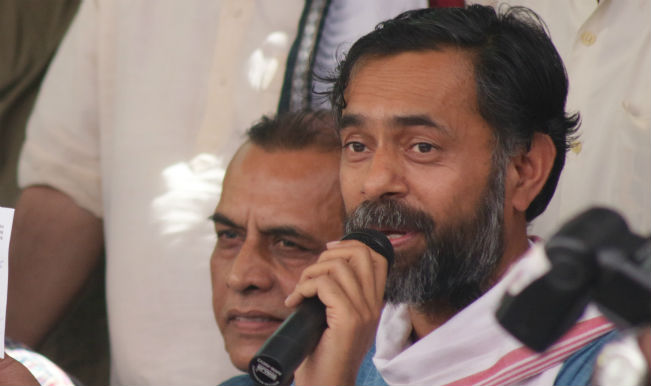 Varanasi, Jun 4: Former Aam Aadmi Party leaders Yogendra Yadav and Anand Kumar today addressed a day-long ‘Swaraj Samvad’ convention here with the aim to prepare a platform for alternative politics in the country. During the convention, issues related to farmers, especially the demand for withdrawal of the Land Acquisition Ordinance, took the centre stage. Other issues such as corruption, strengthening of the use of RTI and women empowerment were also discussed. (Also read: Yogendra Yadav wishes Delhi government ‘all the best’) Also Read - We Will Ask People To Vote Against BJP: Farmer Union Plans To Send Teams To Poll-bound West Bengal, Kerala

In an apparent attack on Delhi Chief Minister and AAP convener Arvind Kejriwal, Yadav said the party which practises “individualism” can never gather the courage to stand against the ruling BJP and Prime Minister Narendra Modi. He advocated for alternative politics in the country, wherein every individual would have an equal say. Also Read - Farmers Will Serve Food and Water To People Stuck On Roads During Chakka Jam Agitation, Says Rakesh Tikait

He said that a ‘Swaraj Abhiyan’ will commence in the second week of June, during which volunteers will fan across the country and will launch a mass-contact programme. He also spoke about the ‘Jai Kisan Movement’ to be held in about 1 lakh villages. As part of the Jai Kisan movement, farmers from across the country will march to Parliament during the Monsoon Session in August.