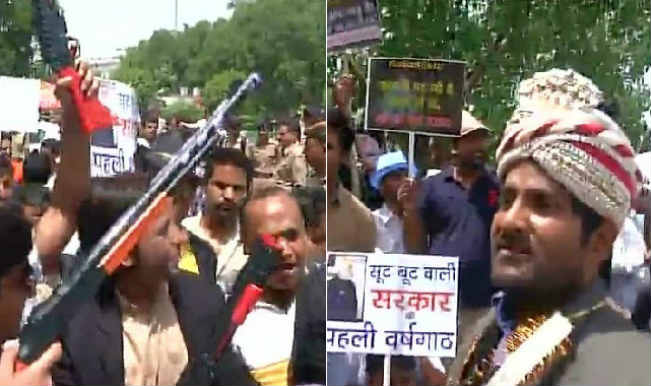 New Delhi, May 26: The Youth Congress on Tuesday staged a unique protest on the first anniversary of the NDA Government by taking out a ‘baraat’ on the streets of the national capital. The protesters, who chanted slogans against the Central government, were later detained by the Delhi police. “This is not really a protest but a way of showing the country that this ‘jumla’ government is a u-turn government. They said inflation will be reduced, but that hasn’t happened. The prices of petrol and diesel are increasing day by day. Even the Rs 15 lakh promise hasn’t been fulfilled. They made big promises about Article 370 and internal security, but what came out of it?” said a protestor. “We are trying to demonstrate all the shortcomings of the Modi ‘Sarkar’ in the past one year,” added another protester. (READ: Narendra Modi pats PMO officials for hard work, dedication) Also Read - Subhra Kundu, Wife of Rose Valley Group Chief Gautam Kundu, Arrested By CBI

Earlier in the day, Congress leader Manish Tewari had dubbed the NDA Government as a ‘Jhooth-Mooth ki Sarkar’ and stated that the present government should get a Bharat Ratna for its incompetence and all-round failure. Prime Minister Narendra Modi, however, had earlier in a message expressed his happiness to see India on “the fast path of development”, and added that the country’s environment since the NDA Government came to power last May is “suffused with a new enthusiasm”. Also Read - Karnataka: Is BJP Planning to End Taluk Panchayat? Congress Questions State's Intention

The Prime Minister said the nation can be proud of the fact that it has an improved image on the international front and is determinedly marching forward to achieve its overall goal of providing welfare to the poor and lifting the marginalized sections of society. (Image credits-ANI Twitter)