The administration of Indian Prime Minister Narendra Modi finds itself in the middle of another major political crisis. 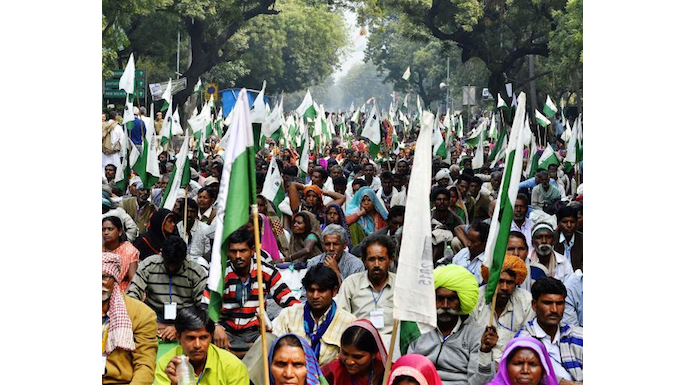 The administration of Indian Prime Minister Narendra Modi finds itself in the middle of another major political crisis. Several reports surfaced in mid-February revealing details about investigations into possible corporate espionage. Suspects have been charged with stealing documents and bribing officials to obtain information, a marked escalation in illegal clandestine tactics that have been an inherent part of Indian business culture for decades. Also Read - India Records 12,584 COVID Cases in Last 24 Hours, Lowest in Seven Months | Key Points

Unlike previous wrongdoing, however, the latest scandal involves the central government. In recent days, a number of high-profile Indian energy firms — several with links to the prime minister and his ruling Bharatiya Janata Party — have been implicated. As a result, the executives of some of India’s largest companies have been arrested. The scandal comes at a time when the central government is facing backlash over the unpopular executive order to reform the country’s convoluted land acquisition policies. The espionage charges further damage the political will for land reform ahead of a contentious month of wrangling to pass a national budget that will increase investment in India’s aging rail networks. These major obstacles serve as another reminder of the significant domestic impediments to reforming the Indian economy. Also Read - Meet Air India's Zoya Aggarwal Who Commanded World's Longest Direct Flight Over North Pole

India’s latest corporate espionage scandal is a result of its endemic challenges to stable economic growth. The country’s massive bureaucracy, complicated regulatory environment and the presence of massive state enterprises in several key industries have created a profitable market for unauthorized information that could offer a competitive advantage. The central government’s infamous structure of regulation, or “permit raj” policies, gave rise to a system where networks of insiders, consultants and expediters use junior-level intermediaries to obtain documents from licit and illicit corporate insiders, government employees and other officials.

Foreign companies looking to increase their presence in Indian markets have complained that native firms appeared to have advance knowledge of government decisions and regulatory changes, helping them get ahead of the competition. To address these concerns, Indian National Security Adviser Ajit Doval launched an investigation in October into the theft of several classified government documents. The trail eventually led back to officials in the Ministry of Petroleum and Natural Gas, also implicating to a lesser extent employees in the coal and power ministries. 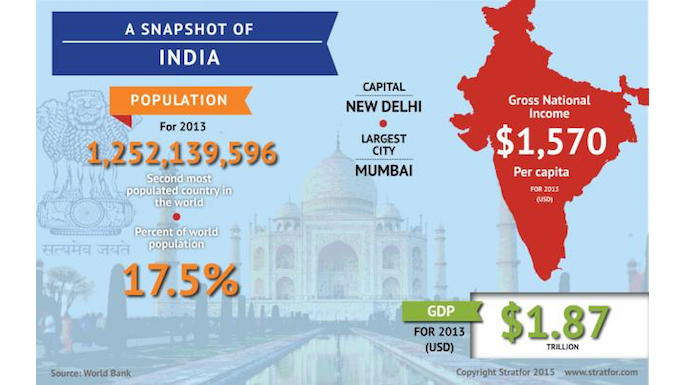 It is still unclear what information was in the illegally obtained documents the government said were stolen. There is speculation that the reports contained commercial data as well as indications of future government policies. Some reports said information regarding national security was also stolen.

Documents obtained by Indian media outlets implicate some of the country’s biggest private energy companies, including Reliance Industries Ltd., Cairn India and Essar Energy. All of these companies had midlevel executives arrested in recent weeks on charges of colluding with government officials to obtain stolen documents, which reportedly contained information on topics such as ongoing negotiations over government pricing schemes for domestically produced natural gas and business strategies from state-owned energy company ONGC Videsh. The documents expose illegal collusion between the oil ministry and private corporations that began over a decade ago, implicating administrations of the incumbent BJP and its rival party, the Indian National Congress. 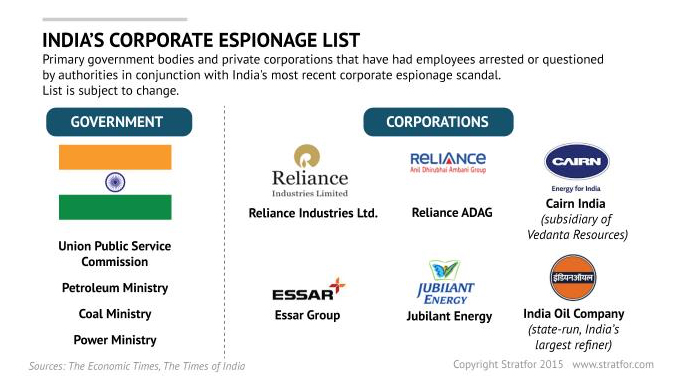 The resulting scandal has been a double-edged sword for the BJP government. The prime minister and many of his fellow party members campaigned heavily on a strong anti-corruption platform that promised to increase corporate and government cooperation to develop more business-friendly policies. Modi and the BJP also targeted India’s bloated and inefficient bureaucracies; in the early days of the leaks, BJP supporters touted the arrests of several executives and industry consultants as tangible results of the Modi administration’s anti-corruption values.

Yet the arrests have stopped short of threatening the small group of ultra-wealthy Indian businessmen who form a considerable bastion of support (and donations) for the BJP and Modi’s government. The administration has also refrained from threatening Cabinet-level ministries with serious reform. The fallout from the investigation has yet to be widely seen, but as the Modi government balks at pushing through institutional reform or targeting India’s powerful business community, the voices of the political opposition are rising.

Interestingly, the opposition National Congress Party has been slow to criticize the BJP over the scandal, perhaps because it involves officials from both parties. Instead, it has decided to wage a different battle: the fight over changing the controversial land acquisition bill that the Congress-led United Progressive Alliance II government passed in 2013. Although the bill created 13 exceptions for the central government to fast-track land acquisitions, the law awarded landowners sweeping protections from state and corporate developers. Among other provisions, it requires the agreement of 70 percent of farmers in an area to approve land sales and development projects, in addition to a lengthy and costly government inquiry into their environmental and social impacts. As a result, in rural areas where Indians are poorer and own smaller parcels of land — such as the resource-rich regions in Odisha and Chhattisgarh — acquiring land has become an increasingly difficult process. This has harmed a variety of economic sectors in addition to slowing resource extraction and the development of road and rail infrastructure. Private development and manufacturing have been hurt as well.

Before formally presenting the 2014-2015 annual budget to parliament Feb. 28, Indian Finance Minister Arun Jaitley went to the Rajya Sabha, India’s upper legislative house, to seek support for amending the land acquisition bill. Unlike India’s lower house, where the BJP has an uncontested majority, the upper house is controlled by the Congress party, which can effectively block any major policy reforms.

To bypass Congress party objections, the Modi government made the controversial decision to enact short-term change, using executive orders that expire after six weeks. For example, in January, the Modi government issued an order adding national security and infrastructure needs to the list of 13 exceptions for fast-tracking land acquisition. Despite fierce opposition from the Congress party, farmers’ groups and leftist parties such as the Aam Aadmi Party, the BJP said it would not reverse any of its changes, even as some party members voice concerns about alienating voters.

This all took place, however, before certain details of the still-evolving scandal emerged. The Modi administration has been forced to table economic reforms while shifting its focus to deal with managing the scandals, as well as Cabinet changes and far-right members of the party. Now it appears the BJP will not be able to pursue the reform of India’s land acquisition policies, not until state elections give it the opportunity to whittle away at the Congress party’s majority in the upper house.

Other economic reforms have run into trouble as well. Indian economists are already questioning recently proposed budget increases for infrastructure development, including a plan to spend $100 billion over the next five years. The rail sector is India’s largest employer with over 1.5 million workers, providing a crucial yet overly congested service that moves more than 13 million people a day, in addition to hauling freight, grain, coal and ore. For decades, land acquisition problems, opposition from labor groups, and funding shortages have plagued efforts to restructure India’s rail network.

The Modi government claims that it can pay for the improvements without increasing rail fares because historically low diesel prices will offset the increase in spending. However, because fuel prices are subject to considerable fluctuation, it is more likely the BJP has become resigned to setting a longer-term end date for the project than the one it campaigned on.

The budget is also facing resistance from India’s business class and outside investors. They want to see signs that the Modi government is ready to rein in state spending. Increased pressure to reduce the budget is yet another obstacle to passing effective long-term reforms.

While the espionage scandal is a distraction from the bigger challenges that loom ahead for Modi and his Cabinet, it presents an opportunity to reinforce his reputation as a no-nonsense reformer. This would give his party a boost after some high-profile setbacks. However, if the investigations lead to accusations that the Modi government is protecting corporate interests over those of the people, a theme that has slowly been gaining ground in social media and in certain critical editorials, the government’s more ambitious and necessary reforms in land acquisition and the rail sector will face more resistance. India’s economy would suffer as a result.

This article is republished with permission of Stratfor, a global intelligence firm. www.stratfor.com