Shah said that Bengal needed a government which was patriotic and did not make effort to save the culprits of the Burdwan blast. 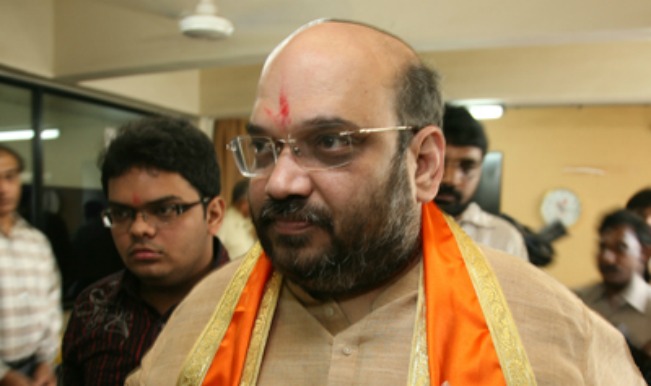 “Saradha Chit Fund money was used in the Burdwan blast. The NIA is not being allowed to probe the blast properly. Hurdles are being created. It is being done in order to save TMC leaders who are involved in the blast,” he told a big rally in the city. A controversy broke out when permission for the rally was not granted by the state authorities, prompting the BJP to move the Calcutta High Court. The nod from the Kolkata Municipal Commission came only yesterday after the court appointed two special officers to oversee the arrangement. Also Read - Durga Puja 2020: A day Ahead of Festivities in Bengal, Calcutta HC Partially Eases 'No-entry' Order For Pandals | Read Here What's Allowed

Shah declared that he was here to see to it that the “corrupt TMC regime is uprooted”, for which, he asserted, “the countdown has begun”. Shah said that Modi’s Lok Sabha victory march would culminate with the BJP’s victory in the Assembly poll in the state due in 2016. “It is the slogan of Narendra Modi to make West Bengal free from TMC regime. After the victory in the Lok Sabha poll, the BJP has won in Harayana and Maharashtra. The party will also win in Jharkhand, J&K, Bihar and Delhi.”

“The victory of the BJP and Narendra Modi will be complete only after it forms government in Bengal,” Shah thundered. Responding to Banerjee’s jibe at him, Shah said that a few days back Mamataji wanted to know who Amit Shah is. “Didi if you can hear and if you can see, please see that I am Amit Shah, a very small worker of BJP. I have come to Bengal to uproot corrupt TMC regime from the state.” “By pursuing vote bank politics and giving shelter to Bangladeshi infiltrators. By doing dramas and making emotional pitches, you can’t fool the people of Bengal anymore. The youths of this state want employment as they too want to go ahead along with the rest of the country,” Shah said.

Shah said that Bengal needed a government which was patriotic and did not make effort to save the culprits of the Burdwan blast. “Bengal needs a government which is patriotic, which doesn’t save the culprits of the Burdwan blast, which does not indulge in corruption, rather puts the culprits behind bars,” he said. The BJP president hoped that within the next one-and-a- half years, Bengal will go along the path of change for the sake of development. Shah alleged that the TMC was giving shelter to Bangladeshi infiltrators to pursue votebank politics.

“Why are you trying to give shelter to Bangladeshi infiltrators? You are the chief minister of Bengal for the people of Bengal, not for Bangadeshi infiltrators and anti-India elements,” Shah said. “Who gave money to those involved in the Burdwan blast? Investigations have revealed that the money of Saradha scam was used in the blast. The CBI will look into it,” Shah said. He appealed to Banerjee not to compromise with national security in order to pursue appeasement and vote bank politics.

Shah also ridiculed the protest by TMC MPs outside Parliament over black money, saying, “What do TMC and Mamata Banerjee have to say about the money siphoned off in the Saradha scam? Was that black money or white money?” The BJP chief also expressed surprise over why the Shyamal Sen Commission was closed by the TMC regime. “I ask Mamata Banerjee to answer who brought her paintings. You should say if TMC leaders have taken benefits from the Saradha scam,” he said.

TMC secretary-general Partha Chatterjee said that despite its attack on Banerjee, BJP would not succeed in tarnishing her image and honesty. “The whole world knows about her honesty and there can’t be any doubt,” he said. Chatterjee alleged that the BJP was using two central agencies CBI and NIA for political purposes. “Both the probe agencies have joined hands with the government in power at the Centre to help the BJP maintain its supremacy,” he claimed.

“The BJP government should know that the Mamata Banerjee government initiated prompt action against the Saradha chitfund scam and arrested the Saradha Group chief Sudipto Sen along with several others immediately. “We have already returned money to over five lakh poor investors, who were cheated by the Saradha Group.