Maharashtra has become the first state under 'Swachh Bharat Abhiyan' to include college students in the ambitious drive wherein every college will adopt a village with an objective to make students the "stake-holders" in the cleanliness campaign. 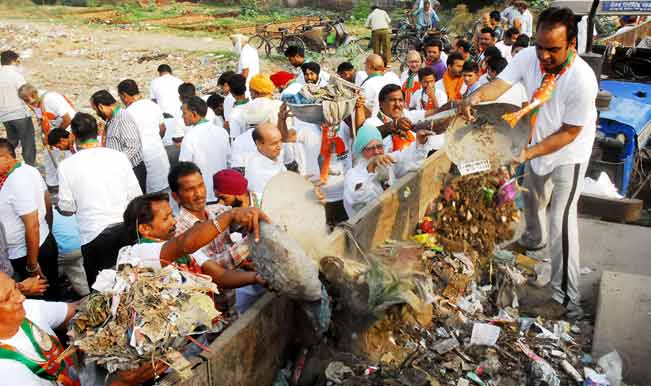 Mumbai, Nov 26: Maharashtra has become the first state under ‘Swachh Bharat Abhiyan‘ to include college students in the ambitious drive wherein every college will adopt a village with an objective to make students the “stake-holders” in the cleanliness campaign. Mumbai University’s (MU’s) ‘Munijan’ (Maharashtra Universities New Initiative for Joint Action Now) scheme in its new avatar will now cover 18 agriculture and non-agriculture universities which have over 4500 colleges with yearly turnout of more than five lakh students. Also Read - 'Global Pandemic Made us Realise Importance of Technology, Teamwork': PM Modi at Grand Challenges Meet

As per the concept note of MU, the ‘Munijan’ scheme will use the human potential for the cleanliness movement. While the state has its own ‘Sant Gadgebaba Gram Swachhata Abhiyan’ which focuses on rural cleanliness, the new scheme will launch a similar campaign in the urban, semi-urban and rural areas where these colleges are located. Under the old ‘Munijan’ scheme, MU used to conduct an annual competition for ideas on social development on October 2 and implement the winning idea throughout the university. Also Read - Maharashtra: 5 Naxals, Including 3 Women Cadres, Gunned Down by Forces in Gadchiroli District

“The revised scheme will need every college to adopt one village as this will inculcate values like cleanliness, team work and patriotism in students, making them stake-holders in the ‘clean India’ campaign,” the note said. The ‘Munijan’ scheme proposes that each college has its director or principal as the chief programme coordinator who will oversee the progress of the movement at his/her institute. To ensure awareness and execution of the scheme, training programmes will have to be conducted to generate awareness and then educate students on how to go about implementing the programme, it said.

A monitoring committee, chaired by Pro-Vice Chancellor, will be formed to monitor the progress of the movement. The committee will be multi-tiered, one with a local body to oversee institutes at the level of university, and other at the level of the state government to monitor work in state as whole.To increase the interest, participation and motivation towards this movement, awards for best institute within the state at each university level and at district level will be given, the note said.

There are also plans to have a web-based sensitisation of students through social media. The scheme will be launched tomorrow by Chief Minister Devendra Fadnavis at the MU, where VCs of all universities will be present, officials said.