A day after NCP extended unsolicited "outside support" to BJP in government formation in Maharashtra, party president Sharad Pawar today said it was the "best alternative" to usher in a "stable" dispensation. 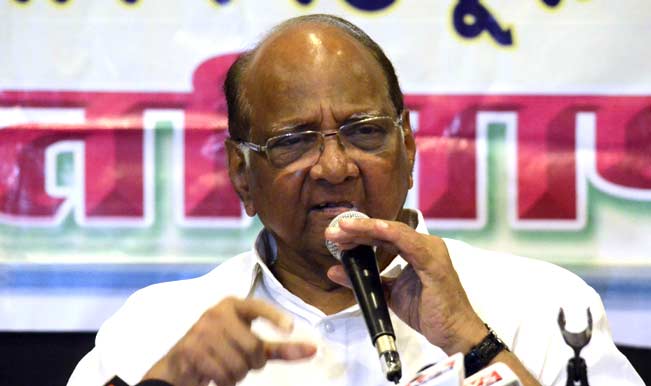 Mumbai, Oct 20: A day after NCP extended unsolicited “outside support” to BJP in government formation in Maharashtra, party president Sharad Pawar today said it was the “best alternative” to usher in a “stable” dispensation. “Offering outside support to BJP was the best among alternatives before us. We have to ensure a stable government comes in Maharashtra,” Pawar said addressing newly elected MLAs after nephew and former Deputy Chief Minister Ajit Pawar was elected leader of the NCP legislature party. (Read: Be ready to face snap polls in Maharashtra, Sharad Pawar tells NCP) Also Read - Pune Authorities Fear Second Wave of COVID-19 Infection in December, Say Prepared to Deal With it

Pawar said no other combination was feasible going by the number of seats won by major parties. Later, talking to reporters Ajit Pawar claimed he was approached by a Congress leader who proposed forming a coalition government with Congress, NCP and Shiv Sena as constituents. “A Congress leader contacted me on phone and suggested we form a government that also includes Shiv Sena…I told him together we have 146 MLAs and the government thus cobbled together will not be stable,” he said. Also Read - Man-eater Tiger That Killed Eight People Captured in Maharashtra's Chandrapur District

While Congress has 42 MLAs in the 288-member Assembly, NCP has 41 and Shiv Sena 63. Though BJP has emerged as the largest party in the House with 122 seats and its ally Rashtriya Samaj Paksha one, it is still 22 seats short of the magic figure of 145. BJP is yet to respond to the offer from NCP, which Prime Minister Narendra Modi had called “naturally corrupt party” during the election campaign in which he had personally targeted both Sharad and Ajit Pawar.

The NCP legislature party later elected former Home Minister R R Patil as its leader in the Assembly and Jaidatt Kshirsagar in the Legislative Council.