Hailing farmers, Modi said lakhs of them from across India came together, gave their tools, parts of their land in order to build the statue.

Kevadiya: Prime Minister Narendra Modi on Wednesday inaugurated an imposing 182-metre statue of Sardar Vallabhbhai Patel in Kevdaiya in Gujarat’s Narmada district and said that the world’s tallest monument will serve as a reminder about his courage to thwart conspiracy to disintegrate India. Also Read - My Life, My Yoga: PM Modi Launches Video Blogging Contest for Citizens, Winner to Get Rs 1 Lakh Prize Money

He used the occasion to slam those criticising the decision to build the monument, questioning whether any crime had been committed by constructing such memorials for national heroes like Patel. Also Read - Lockdown 5.0? Netizens Gear Up to Face the Extension With Hilarious Memes & Jokes

The giant monument, named as the ‘Statue of Unity’ and built on an islet Sadhu Bet near Sardar Sarovar Dam in Gujarat’s Narmada district, is twice the height of the Statue of Liberty in the US and taller than the 153-metre Spring Temple Buddha in China. Also Read - 'Tell Country Exactly What's Happening': Rahul Gandhi to Centre on India-China Face-Off

The monument was conceptualised by Modi during his tenure as Gujarat Chief Minister and he had laid the foundation stone for it in 2013.

Patel, the first Home Minister of Independent India, is credited with merging 550 princely states into the Union of India. He had used force to annex princely states of Junagadh ruled by Nawab and Hyderabad ruled by nizam, both of whom had wished not to merge their states with the India union.

The statue has been built using over 70,000 tonnes of cement, 18,500 tonnes of reinforcement steel, 6,000 tonnes of structural steel and 1,700 metric tonnes of bronze, which was used for the outer cladding of the structure. 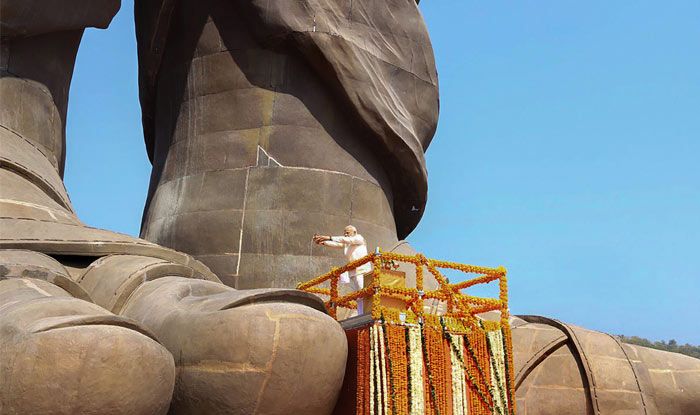 “To my surprise, some people of this country are seeing our movement through the political glasses. We are criticized for praising the contributions of national heroes like Sardar Patel. We are made to feel as if we have committed a serious crime,” PM Modi said during his 55-minute speech.

He then posed a question to the audience, “You tell me, is it a crime to remember our national heroes?” To this, the audience replied in the negative.

The prime minister said if Patel had not united the country, the countrymen would have needed visas to see lions in Junagadh or pay homage at Somnath in Gujarat or view the Charminar in Hyderabad.

Hailing farmers, Modi said lakhs of them from across India came together, gave their tools, parts of their land in order to build the statue.

Modi also suggested the Gujarat government to set up a “virtual museum”, near the statue, in the memory of all the erstwhile royals who had given up their states for a united India.

Opposition Parties Question Why no Bigger Statue For Mahatma Gandhi

The opposition parties questioned the BJP as to why there was no bigger statue for Mahatma Gandhi and also accused the ruling party of trying to “hijack” the legacy of Independence heroes like Sardar Patel.

“Ironic that a statue of Sardar Patel is being inaugurated, but every institution he helped build is being smashed. The systematic destruction of India’s institutions is nothing short of treason,” he tweeted, shortly after the inauguration.

Gandhi also alleged that the “systematic destruction” of India’s institutions is nothing short of “treason”.

BSP chief Mayawati demanded an apology from the BJP and the RSS who flayed her over the statues of Dalit leaders her government had installed in Uttar Pradesh.

Congress leader Shashi Tharoor said there was no such gigantic statue of Mahatma Gandhi in the country and wanted to know why BJP had not built a bigger statue for him.

“The biggest one is in Parliament..But this is a 182-metre statue for his disciple. Why is there such a big statue for a disciple of Gandhiji in the country where there is no statue of that size for the Mahatma?” he asked while addressing a function at the district congress committee office in Thiruvananthapuram. CPI general secretary Suravaram Sudhakar Reddy also echoed Tharoor’s sentiments.

“Patel, a very simple person, was known as the disciple of Gandhiji,” Tharoor said.

“I am asking a question…Is it right to erect such an imposing statue of Patel, a man of simplicity and a true Gandhian, who moved along with poor peasants,” he said.
Tharoor said BJP had no answer to the query why they did not erect a bigger statue of the Mahatma.

The reason is that they do not believe in Mahatma Gandhi’s principles of non-violence, he alleged.

He also alleged that BJP was trying to “hijack” the legacy of freedom fighters and national heroes like Patel as they have no leaders of their own in history to celebrate.

He said Patel was a Congress leader and BJP should not be allowed to adopt him.