According to reports, traces of alcohol were found in her blood too.

New Delhi, Feb 26: Bollywood actress Sridevi died due to accidental drowning in a bathtub at a hotel in Dubai, forensic report revealed on Monday. According to reports, traces of alcohol were found in her blood too. The forensic report released by Dubai Police said that the medical examination of Sridevi’s body revealed that she had taken alcohol before her death on February 24 night. Sridevi’s mortal remains are likely to be flown back to Mumbai from Dubai on Monday night. The actress’s last rites were scheduled to take place in Mumbai afternoon but it has been delayed for now.Also Read - Valimai Teaser: Thala Ajith on Fire, Excited Fans Declare it 'Blockbuster of The Year'

Sridevi’s Body to be Flown Back to Mumbai Tonight: Live Updates

Boney Kapoor and Sridevi, 54, were in Dubai to attend nephew Mohit Marwah’s wedding. While most of the extended family as well as Boney and younger daughter Khushi had returned, Sridevi decided to stay back. The elder daughter, Jahnvi, was in Mumbai to complete a shooting schedule.

Under the influence of alcohol, lost her balance. Fell into the bathtub and drowned. #Sridevi https://t.co/vYS1il1E7T pic.twitter.com/dCOvBuSBmm

On Saturday, Boney, who produced superhit film “Mr India”, which gave Sridevi one of her most remembered roles, flew back to Dubai to surprise his wife with a dinner, reports claimed.

He reached the Jumeirah Emirates Towers Hotel around 5.30pm (Dubai time) and woke her up and they chatted for about 15 minutes, the report said. 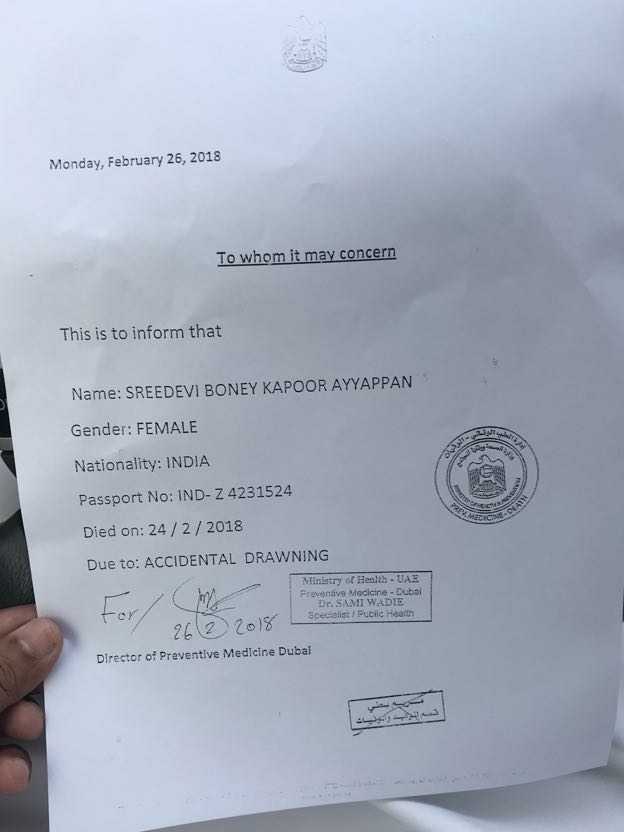 Sridevi then went to the bathroom to get ready. When she didn’t come out for 15 minutes, Boney knocked on the door. He did not get any response and forced open the door, to find her lying motionless in the bathtub that was full of water.

“He tried to revive her and when he could not, he called a friend of his. After that, he informed the police at 9 pm,” Khaleej Times quoted a source as saying.

The body of the late actor, who embodied superstardom in the 1980s and 1990s in what was a hugely male dominated industry, is expected to reach Mumbai late today after authorities in Dubai conclude all the formalities.