Rahul Gandhi's hug to PM Modi and the subsequent 'wink' after coming back to his seat prompted a furious discussion about the appropriateness of his actions.

The Narendra Modi government on Friday comfortably won the no-confidence motion moved by the TDP and other opposition parties in the Lok Sabha. While 325 MPs voted in favour of the NDA government, the opposition could garner support of just 126 members.

The vote came after the surprise hug and handshake from Congress President Rahul Gandhi failed to soften Prime Minister Narendra Modi who launched a string of attacks on the Congress-led opposition, including Rahul and his mother Sonia Gandhi.

Mocking Rahul for gesturing him to stand from the seat before the now-famous hug, PM Modi said the Congress president was in a hurry to unseat him and grab the PM’s chair, as he dubbed the no-trust vote as an act of “arrogance”.

The prime minister also dared the opposition to bring a no-confidence motion against his government again in 2024 – a remark seen as his confidence in returning to power next year and forming the government in 2024 also – as he gave a point-by-point rebuttal to the charges levelled by Rahul Gandhi.

During his nearly one-and-half hour long reply to the Congress leader’s hug-capped scathing attack, PM Modi also took a dig at the Congress president’s apparent post-hug wink in Parliament saying the entire nation saw what the eyes did today, as he made gestures with his hands and eyes to show Gandhi’s action. 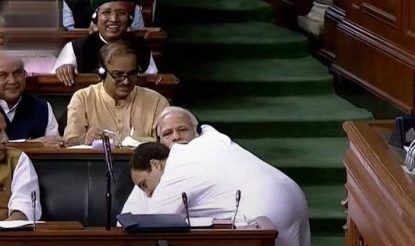 Rahul Gandhi’s hug to PM Modi and the subsequent ‘wink’ after coming back to his seat prompted a furious discussion about the appropriateness of his actions.

Replying to the no-confidence motion moved by the BJP’s former ally TDP and supported by Congress among other opposition parties, Modi said only the 125 crore people of the country can decide who would sit in the prime minister’s chair or who can be unseated.

“What is the hurry,” Modi said, while referring to Gandhi’s hand gestures when he came across to PM’s chair and hugged him during the non-confidence motion debate.
PM Modi looked nonplussed initially and did not stand up, but recovered quickly and called Gandhi back and patted him on the back.

In another swipe at Gandhi’s apparent slip of tongue in saying that the prime minister could not see him eye-to-eye, Modi said, “You are a ‘naamdaar’ (known by name) and I am ‘kaamdar’ (known by work). I cannot dare see you eye-to-eye.”

The prime minister went on to list names of leaders like Sardar Patel, Subhash Chandra Bose, Chandra Shekhar and Pranab Mukherjee who he said tried to see eye-to-eye with the Congress and the result is known to everyone.

Referring to the Dokalam stand-off, he said, “When the whole country was united at the time of Dokalam, you (Gandhi) met the Chinese envoy.”

On Gandhi’s allegations on the Rafale aircraft deal, he said “we must abstain from making childish statements on sensitive issues.”

He also termed the surgical strikes being described as ‘jumla strike’ an insult to the security forces.

In his reply, PM Modi asked all Lok Sabha members to dismiss the non-confidence motion, which he said was driven by arrogance and Congress’ attempt to test its own probable allies.

“Arrogance is behind the no confidence motion,” PM Modi said and hit out at the Congress, saying this is not the floor test of the government but a “force” test of the main opposition party and its so-called allies.

The prime minister also hit out at Gandhi’s “bhagidar” (collaborator) remark, saying he is a ‘chowkidar’ and a ‘bhagidar’, but not a ‘saudagar’ (trader) or ‘thekedar’ (contractor) like the Congress president.

Rahul had said an industrialist under a debt of Rs 35,000 crore was given a contract in the Rafale deal and he benefitted to the tune of Rs 45,000 crore, while asking the prime minister to answer if the Cabinet Committee on Security took the decision.

Asserting that some people are indulging in “negative” politics, PM Modi said he was not doing politics of appeasement or vote bank.

“We have been working with ‘Sabka Saath Sabka Vikas’ mantra,” he said.

PM Modi said the NDA government has done several things for the benefit of the people, but the opposition does not believe in the facts. “We are taking steps for doubling the income of farmers by 2022,” he said.

The prime minister said the opposition, especially the Congress does not trust the Chief Justice of India, the Election Commission and the electronic voting machines.
He said, “those who don’t have confidence in themselves, cannot trust anyone.”

“I pray to God to give you the strength to bring a no- confidence motion in 2024 also. My best wishes are with you”, PM Modi said.

He said the major opposition party had brought the no-trust motion “to spread instability in the country.”

“Had it not been your arrogance, and had you understood the problems of the states, GST would have been implemented five years ago,” he added.

The prime minister also condemned the incidents of rape and atrocities against women and said “any instance of violence brings shame to the nation.

“I will once again urge the state governments to punish those who indulge in violence,” PM Modi said in an apparent reference to the cases of mob lynching and assured that his government stood with the Muslim women in their quest for justice.

He blamed the Congress for division of the country at the time of the independence, as also for division of Andhra Pradesh in a manner which had left the people there unhappy.

Modi said when the TDP decided to pull out of NDA, he had warned its leader N Chandrababu Naidu that his party was “getting entangled in a race of one-upmanship with the YSR Congress.

Modi said the NDA government is committed towards the development of Andhra Pradesh and Telangana.

He said the government of Atal Bihari Vajpayee had created Uttarakhand, Chhattisgarh and Jharkhand.

“It was done peacefully. These states are prospering … The Congress divided Andhra Pradesh and their conduct then was shameful,” he said.

A total of 325 MPs opposed while 126 MPs supported the no trust motion moved by the TDP, a former BJP ally, during the division after a marathon 12-hour debate. A total of 451 MPs were present and voted in the House and the majority mark required in a House with an effective strength of 534 MPs came down to 226.