Afghanistan-Taliban Crisis LIVE: Government sources asserted that India has been allowed to operate two flights per day from Kabul to evacuate its nationals stranded in Afghanistan.

Afghanistan-Taliban Crisis LIVE: Amidst the despair, around 350 people have been evacuated from Kabul by two Indian flights yesterday. As per the reports, the aircraft is expected to land in India on Sunday. Sources told Indian Express that their repatriation was delayed due to ‘logistics issues’ at Kabul airport—which is under the control of US forces. Earlier on Saturday, government sources asserted that India has been allowed to operate two flights per day from Kabul to evacuate its nationals stranded in Afghanistan. The permission has been granted by the American and North Atlantic Treaty Organization (NATO) forces who have been controlling operations of the Hamid Karzai International Airport after the Afghan capital was taken over by the Taliban on August 15. A total of 25 flights are being operated by them as they, at present, are focusing on evacuating their citizens, weaponry and equipment.Also Read - VIDEO: Desperate to Flee Afghanistan, Thousands Flood Kabul Airport | WATCH

Updates to this live blog have ended.

“Our political officials met with leaders here in Kabul, their views are important, discussions are moving, InshaAllah, there is hope for an announcement on the government soon,” Taliban spokesperson Zabihullah Mujahid told TOLOnews.

US National Security Advisor Jake Sullivan on Sunday told CNN that the threat of ISIS against the large mass of Americans and Afghans at the Kabul airport trying to evacuate Afghanistan is “real…acute…persistent…it is something we’re focused on with every tool in our arsenal.” Sullivan noted that the US is placing “paramount priority” on preventing any terrorist attack, reported CNN.

Resistance group getting more strong ready to go for a war to die for freedom.

Panjshir is the only hope for freedom pic.twitter.com/pGwgk0fWtz

17.41 PM: US President Jow Biden to Address on Afghanistan Crisis

US President Joe Biden will address on the Afghanistan crisis at 4.00 PM EST or 1.30 AM IST tonight. Biden’s address will take place after a meeting with his national security team on intelligence, security and diplomatic updates on the evolving situation amid Taliban takeover.

The Taliban are on their way to attack and seize Panjshir Valley (Panjshir Province) in Afghanistan, one of the final hotbeds of resistance amid the terror-group takeover. Children of local Afghan residents were seen carrying rifles and a flag in Bandejoy area of Dara district in Panjshir province as they prepare to fight back in case of Taliban attack.

The Taliban on Sunday blamed the US for the chaotic evacuation of tens of thousands of Afghans and foreigners from the capital Kabul, one week after the hardline Islamist group returned to power in a rapid victory that stunned the world, reports news agency AFP.

15:11 PM: The situation in Afghanistan is very dangerous for people, with firings and bombings all around. The Taliban cannot be trusted. They are beating up people. We were living in fear, said Dipen Sherpa, one of the evacuees from Afghanistan, in Delhi.

"Our sincere thoughts are with the families of the seven Afghan civilians who have sadly died in crowds in Kabul," a ministry spokesperson says pic.twitter.com/SSiVfLeJ7R

12:13 PM: The Afghan special cell established by MEA received more than 2000 calls for 5 days, it answered around 6000 queries over WhatsApp. More than 1200 mails were replied to for 5 days, said sources.

11:52 AM: Karzai and Abdullah meet members of Taliban’s political office in Kabul 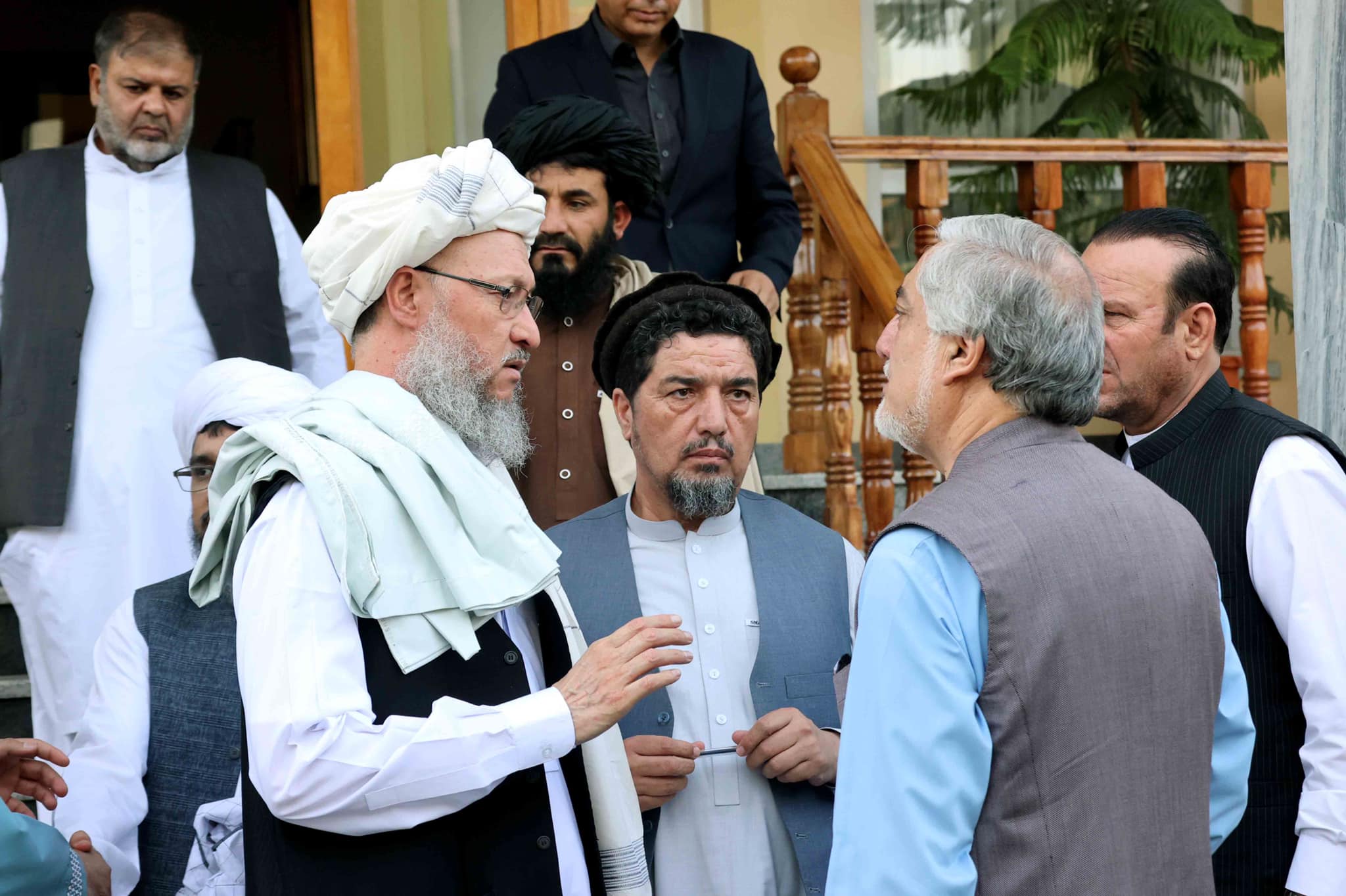 “An infant has also landed in a special IAF flight to India without a passport,” an evacuation co-ordinating official told ANI.

#WATCH | An infant was among the 168 people evacuated from Afghanistan's Kabul to Ghaziabad on an Indian Air Force's C-17 aircraft pic.twitter.com/DoR6ppHi4h

11:09 AM: Afghan Woman Thanks India For Helping Her

“Situation was deteriorating in Afghanistan, so I came here with my daughter & two grandchildren. Our Indian brothers & sisters came to our rescue. They (Taliban) burnt down my house. I thank India for helping us,” said an Afghan national at Hindon Air Force Station, Ghaziabad

11:08 AM: People wait for their RTPCR tests at Hindon Air Force Station

Afghanistan’s MP Narender Singh Khalsa breaks down as he reaches India from Kabul. “I feel like crying…Everything that was built in the last 20 years is now finished. It’s zero now,” he says.

#WATCH | 168 passengers, including 107 Indian nationals, arrive at Hindon IAF base in Ghaziabad from Kabul, onboard Indian Air Force's C-17 aircraft

Passengers are yet to come out of the airport as they will first undergo the #COVID19 RT-PCR test.#Afghanistan pic.twitter.com/x7At7oB8YK

10:08 AM: Indian Air Force’s C-17 aircraft that took off from Kabul earlier this morning, lands at Hindon IAF base in Ghaziabad. 168 people, including 107 Indian nationals, were on board the aircraft.

09:24 AM:  Two other flights – Air India and IndiGo – carrying Indians from Kabul landed in Delhi from Tajikistan’s capital Dushanbe and Qatar’s Doha this morning.

The Delhi Sikh Gurdwara Management Committee has denied that Sikhs living in Afghanistan have been kidnapped by the Taliban even as the security situation in the war-torn country has further deteriorated. Delhi Sikh Gurdwara Management Committee chairman Manjinder Singh Sirsa said, “All our families are safe inside the Gurdwara, although there was some movement yesterday. Around 300 people are absolutely safe.”

07:52 AM: ‘Government committed to the safe return of all Indian nationals’

The MEA has said the government is committed to the safe return of all Indian nationals from Afghanistan. The Foreign Ministry said that the main challenge for travel to and from Afghanistan is the operational status of the Kabul airport.

Indian Air Force’s C-17 aircraft took off from Kabul, Afghanistan earlier this morning with 168 people onboard. It will land at Hindon IAF base in Ghaziabad later today, said Government Sources.

Evacuation continues!
IAF special repatriation flight with 168 passengers onboard, including 107 Indian nationals, is on its way to Delhi from Kabul. pic.twitter.com/ysACxClVdX

07:33 AM: “Evacuation continues! IAF special repatriation flight with 168 passengers onboard, including 107 Indian nationals, is on its way to Delhi from Kabul,” tweeted MEA Spokesperson Arindam Bagchi.

Taliban entered Kabul on Sunday and took control of the presidential palace. The Indian government has been closely monitoring all developments in Afghanistan.