The loss of contact with the AirAsia plane comes nearly 10 months after the disappearance of Malaysia Airlines Flight MH 370, which dropped off radar over Southeast Asia on March 8. 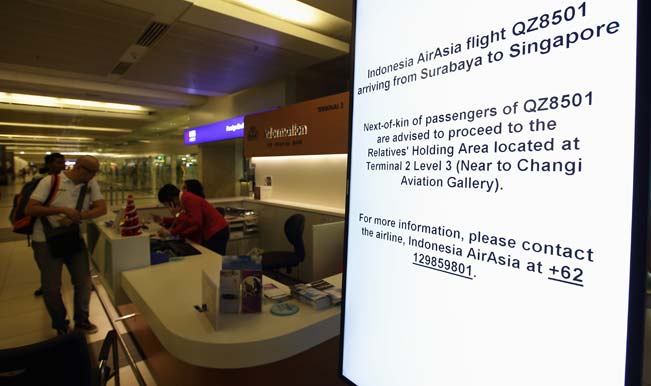 Singapore, Dec 28: An AirAsia flight with 162 people aboard went missing en route from Indonesia to Singapore today after losing contact with air traffic controllers. There were unconfirmed reports that an aircraft has crashed in the waters off East Belitung, off the east coast of Sumatra. However, the details of the aircraft were not known. Also Read - 'AirAsia India Violates Passenger Safety,' Alleges Suspended Pilot; DGCA Begins Probe

Contact with the plane was lost 42 minutes after takeoff. There were no Indian nationals on board. An Indonesian transport official confirmed that seven crew and 155 passengers were on board. The plane took off from Surabaya (Indonesia) at 5.20 am local time and was scheduled to land at Singapore’s Changi Airport at 8.30 am. (Read: AirAsia Flight QZ8501: Search on as local reports claim the plane has crashed)

A statement on AirAsia’s Facebook page said: “AirAsia Indonesia regrets to confirm that flight QZ8501 from Surabaya to Singapore has lost contact with air traffic control at 0724hrs this morning.”

“At the present time we unfortunately have no further information regarding the status of the passengers and crew members on board, but we will keep all parties informed as more information becomes available,” the Malaysia-based carrier said in a statement.

The aircraft was an Airbus A320-200 with the registration number PK-AXC. “At this time, search and rescue operations are in progress and AirAsia is cooperating fully and assisting the rescue service,” the statement said.

Indonesian Transport Ministry official Hadi Mustofa said the plane had asked for an unusual route before it lost contact, local media reported. Air Asia said the pilot had requested “deviation” from the its flight plan because of bad weather.

“The aircraft… was requesting deviation due to en route weather,” it said. Indonesian TV channels said there were 149 Indonesians, three Koreans, one Singaporean, one Briton and one Malaysian on board.

Search and rescue operations have been activated by the Indonesian authorities from the Pangkal Pinang Search and Rescue office. The CAAS and Changi Airport Group (CAG) Crisis Management Centres have already been activated. “We are working with the airline?s crisis management team,” it said.

“Thank you for all your thoughts and prayers. We must stay strong,” tweeted Fernandes, an ethnic Indian, who set up the budget airlines which now flies to several countries.

Malaysia has also offered assistance in the search operation. AirAsia is popular in the region as a budget carrier. It has about 100 destinations, with subsidiaries in several Asian countries. The loss of contact with the AirAsia plane comes nearly 10 months after the disappearance of Malaysia Airlines Flight MH 370, which dropped off radar over Southeast Asia on March 8.

Searchers are yet to find any debris from Flight MH 370, which officials believe crashed in the southern Indian Ocean. Singapore Air Force has placed two C-130 aircraft on standby to assist in the search and locate operation.

The Singapore Armed Forces said it stands ready to commit more assets if required for the operation.