After the AirAsia Flight QZ8501 went missing, the famous Bermuda Triangle theory has been put forward once again. 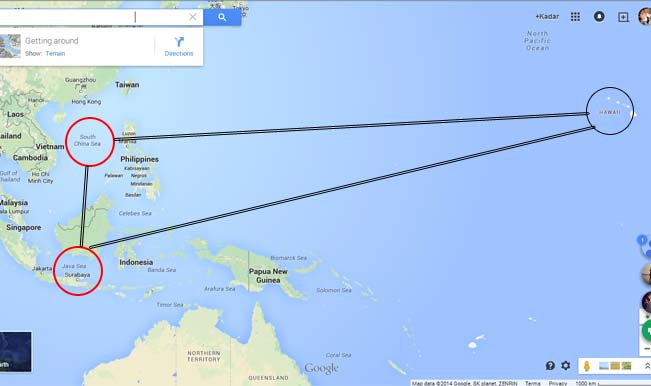 An AirAsia Flight QZ8501 went missing on December 28, taking 155 passengers and seven crew members on board in the Java Sea. It is the second major incident related to an airline of Malaysian origin where the aircraft went missing with its passengers and crew. A search operation began immediately to find the missing jet, and now debris and six bodies have been found. After the AirAsia Flight QZ8501 went missing, the famous Bermuda Triangle theory has been put forward once again because of the suspicious circumstances under which the aircraft vanished in South Asian waters. We take a look at three of these mysterious disappearances:

Amelia Earhart who was the first woman to fly the Atlantic solo, disappeared on July 2, 1937, while attempting to be the first woman to circumnavigate the world solo. This was the first incident. There has been no trace of Earhart or her twin-turboprop Lockheed Electra plane that is suspected to have gone down in the central Pacific near Howland Island, almost half-way between Hawaii and Australia.

On March 8 this year, the world was stunned when Malaysia Airlines Flight MH370 disappeared, taking 239 passengers with it. Until now, the world has no clue about it. The search still continues for MH370 that disappeared from the radar over the South China Sea. What is shocking is that the communications system of Flight MH370 was deliberately disabled just before it reached the East coast of peninsular Malaysia. The Malaysian Prime Minister Najib Razak said that the Malaysia air force radar data showed an aircraft, believed but not confirmed to be Flight MH370, did turn back and fly toward the West, and then back over peninsular Malaysia before turning Northwest. These movements were consistent, indicating that someone was on the plane.

Now the AirAsia flight that changed its route due to bad weather conditions suddenly vanishes from the radar in the Java Sea. There were reports that the plane could be at the bottom of the sea and some debris and bodies have been found, but it is yet to be confirmed that they belong to the Flight QZ8501.

In all the sudden disappearances of the aircraft from the radar, what is suspicious is that the communication system had no problem while the aircraft were in the air. Second, how could the Malaysian planes just go missing, particularly in an area that is counted as one of the busiest sea lanes of the world?

Are the mysterious disappearance of airplanes in South Asian waters just a mere co-incidence or is there something suspicious like the Bermuda Triangle at work? There is no scientific evidence to back this theory but the human mind is curious enough to imagine such things!