US President Barack Obama greeted nurse Nina Pham in the Oval Office with a big hug to celebrate her recovery from the Ebola virus, which she was the first person in the country to contract. 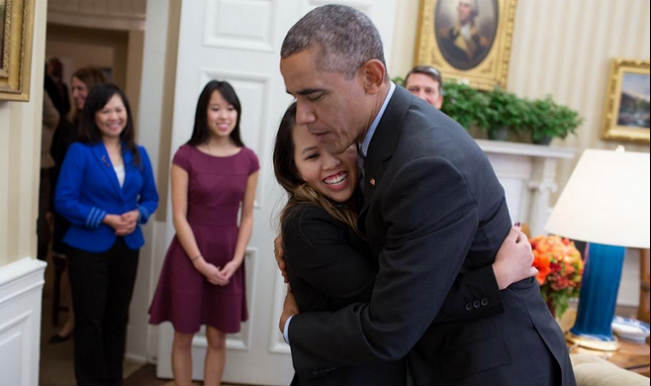 Washington, Oct 25: US President Barack Obama greeted nurse Nina Pham in the Oval Office with a big hug to celebrate her recovery from the Ebola virus, which she was the first person in the country to contract. Obama met with Pham, 26, in the White House, where photographers immortalised an embrace that reflected the president’s wish to calm American citizens following the arrival of Ebola in the country. Also Read - 'Time To Turn Page' On Afghanistan: Obama Backs Biden's Decision To Withdraw Troops Till Sep 11

The meeting was closed to the press and only photographers were allowed in the Oval Office to record the event. The nurse, who in a Dallas hospital contracted the virus while looking after a Liberian infected with Ebola, was released on Friday morning from the medical centre of the National Institutes of Health (NIH) in Bethesda, Maryland, where she was treated. Read: US to track everyone coming from Ebola nations Also Read - President Joe Biden to Withdraw US Troops From Afghanistan by September 11

NIH authorities said in a communique that Pham was “free” of the virus, and soon afterwards the nurse left the medical centre. Before her meeting with Obama, she did not have to pass through any checkpoint or additional control, since she had submitted to five different tests to confirm that she no longer had the virus, White House spokesman Josh Earnest told reporters.

Upon leaving the medical centre, Pham told reporters that she felt “fortunate and blessed to be standing here today”, adding that she believed “in the power of prayer”, after thanking all the people who had prayed for her cure. Read: Dark shadow of Ebola now a global threat: Trinidad Prime Minister