Sanders featured in the clip in a nail salon in Detroit, where the second round of Democratic candidate debates will take place on Tuesday and Wednesday.

US presidential hopeful Bernie Sanders and rapper Cardi B have filmed a campaign video together to attract young voters. Sanders featured in the clip in a nail salon in Detroit, where the second round of Democratic candidate debates will take place on Tuesday and Wednesday.Also Read - Cardi B Exudes Goddess Like Effect in Nude Sculptural Dress Designed by Gaurav Gupta | See Pics

“We (are) working on a way to involve more young people in the political process. The future of America depends on young people. They are voting in large numbers, but not large enough numbers,” he told the media. Also Read - Face of Gold! Cardi B Goes Both Weird And Iconic at American Music Awards 2021 - See Pics

Cardi B posted a picture of the meeting with Sanders on her Instagram account and thanked Sanders for sharing his views.

“Not me, US. Thank you Senator Bernie Sanders for sitting with me and sharing your plans on how you will change this country. A couple of weeks ago I asked my followers if you had the opportunity to have a question answered by a democratic candidate what would it be? I got a lot of submission and selected the most popular questions to get answered. Stay tuned to see how he will fight for economic, racial, and social justice for all. Together, let’s build a movement of young people to transform this country. LETS LEARN OUR CANDIDATES!” she wrote. 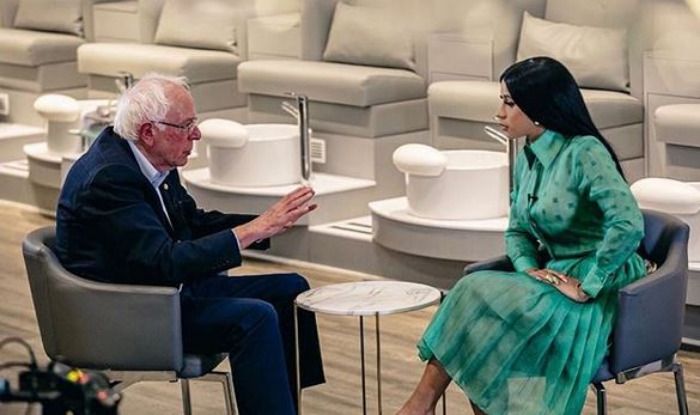 It was the first time Sanders and Cardi B had met in person, although they had both repeatedly expressed mutual admiration.

“I been reading about Bernie Sanders and I’m really sad how we let him down in 2016. This man been fighting for equal rights, human rights for such a long time,” she wrote.

“Seeing this country become a better place been really his passion for a long time not a new front for a campaign.”

In an earlier interview with US television host Jimmy Kimmel, Sanders said he had talked on the phone with Cardi B on “multiple occasions” and that the artist was worried about what is happening in the US.

Asked what Cardi B’s support means for him, Sanders said: “What it means is that, what Cardi B does is not only is she an enormously popular entertainer what she is doing is speaking to young people about the important issues that are on their minds and I applaud that very much.”