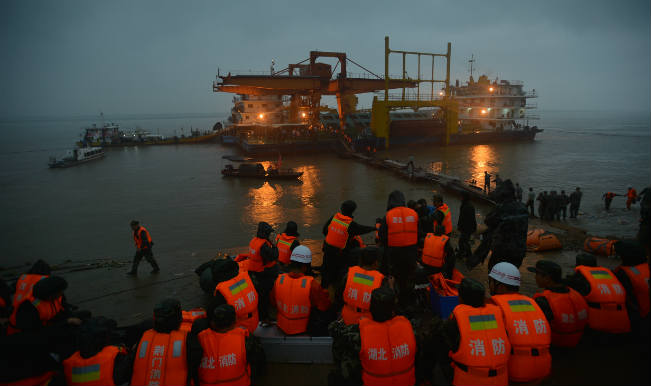 Beijing, June 7: A total of 431 people have been confirmed dead after rescuers lifted a Chinese cruise ship that capsized on the Yangtze river on June 1, authorities said on Sunday. According to rescue officials, only 14 people have been rescued so far, while 11 others remain missing, Xinhua news agency reported. The 2,200-tonne Eastern Star was carrying more than 450 people on an 11-day trip along China’s longest river when it capsized due to a tornado near Jianli on Monday (June 1). (Read: China ship capsize death toll update: 345 die as cruise ship overturns in Central China) Also Read - China ship capsize: Hundreds missing, 20 rescued after ferry sinks in Yangtze river

A mourning ceremony was held on Sunday.  Ship horns wailed in grief as hundreds of people stood at the accident site and mourned during a three-minute silent tribute to the victims, the seventh day after the tragedy. According to Chinese tradition, the seventh day after one’s death is an occasion for the deceased’s relatives to mourn the passing of their loved one.