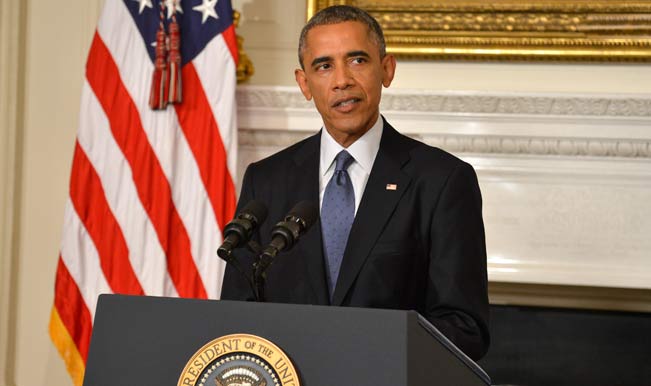 Washington, Nov 21: Asserting his presidential authority, a defiant President Barack Obama resorted to unilateral executive action to fix America’s broken immigration system and protect five million illegal immigrants, including thousands from India, from deportation. In a prime time address to the nation from the East Room of the White House Thursday night, he rejected accusations by opposition Republicans, who are set to gain control of both chambers of US Congress in January following their victory in November elections, that his action amounted to amnesty to undocumented immigrants. Read – Obama provides legal status to five million illegal immigrants Also Read - 'Unlike UP...': Rahul Gandhi Hits Out At BJP Over 'Gandhis Don't Care' Comment

“Today our immigration system is broken and everybody knows it,” Obama said. “It’s been this way for decades and for decades we haven’t done much about it,” he said in justification of his unilateral action without the consent of Congress. “Amnesty is the immigration system we have today – millions of people who live here without paying their taxes or playing by the rules while politicians use the issue to scare people and whip up votes at election time.” Also Read - Bihar Assembly Election 2020: Migrants Walked Kms Without Food & Water, Did PM Help You Then, Asks Rahul | Highlights

Obama argued that “mass amnesty would be unfair, but mass deportation would be both impossible and contrary to our character”. “What I’m describing is accountability – a common-sense, middle-ground approach: If you meet the criteria, you can come out of the shadows and get right with the law.”

Under his plan immigration, authorities will be asked to go after “felons, not families. Criminals, not children. Gang members, not a mom who’s working hard to provide for her kids,” Obama said. “We’ll prioritise, just like law enforcement does every day.” As he spoke, crowds of immigrants wearing winter coats and colourful caps rallied and cheered outside the White House in chilly weather with many holding placards reading: “Gracias Presidente Obama”.

While 5.9 million Mexicans make up over half of an estimated 11.2 million unauthorised immigrants in the US, India is the fourth top source country with 450,000 living in the country without papers, according to a new Pew Research Centre report. About 8.1 million unauthorised immigrants make up 5.1 percent of the US labour force, the report said. Many of them are engaged in menial low paying jobs that Americans don’t want to do.

Another step that would likely benefit Indians was his proposal to “make it easier and faster for high-skilled immigrants, graduates, and entrepreneurs to stay and contribute to our economy, as so many business leaders have proposed”. With 168,367 H-1B visas, India cornered nearly two thirds of the total work permits for skilled workers in 2012.

According to a White House fact sheet three critical elements of Obama’s executive actions are: cracking down on illegal immigration at the border, deporting felons, not families and accountability – criminal background checks and taxes. The President’s actions will also streamline legal immigration to boost US economy and will promote naturalisation for those who qualify, it said.

Accusing Obama of stretching his powers as president, his conservative critics vowed to do whatever was necessary to stop his plan. Republican Mitch McConnell, who will become the Senate majority leader in January said Obama would regret choosing to ignore the will of the American people.

“If President Obama acts in defiance of the people and imposes his will on the country, Congress will act,” he warned. As they mulled action ranging from censure to defunding Obama’s actions to impeachment, the Washington Post had a piece of advice for Republicans looking for revenge: “they have a ready way to take it. It’s called legislation.”