Destruction of Buddhist Education Institutes in Tibet – China Must Answer

The place which started with a few hundred students later became the biggest centre of Mahayana Buddhism in 2015 with the number of students crossing 40,000. The presence of such a high number of scholars shook the roots of Chinese Han government.

When legendary Lama Khenpo Jigme Phuntsok founded Serther Institute, commonly known as “Larung Gar Buddhist Academy”, in 1980 in the heart of Kham Region, he never expected that this dream would be shattered by Chinese extremists soon after his death. Also Read - China Asks US to Walk With it Instead of Continuing Provocations

Khenpo Jigme Phuntsok’s life was full of miracles. In old Tibetan legends, it’s said that when he came out of his mother’s womb, he was in a meditation position and recited Manjushri’s Mantra. He used to dream of a place where people from all over the world can come and study Tibetan Buddhism. Accordingly, he selected a place at an altitude of over 13,000 feet which was full of peace and tranquillity and called it a “City in the Sky”. Also Read - Yikes! Doctor Removes 20 Live Worms From 60-Year-Old Chinese Man’s Eyelid

The place which started with a few hundred students later became the biggest centre of Mahayana Buddhism in 2015 with the number of students crossing 40,000. The presence of such a high number of scholars shook the roots of Chinese Han government. Also Read - No Space For Third Party to Intervene on Border Issue: China Tells US

A scholar can change the world, as we saw in India in 3rd Century BC when an ordinary scholar from Takshashila university had shaken the entire Indian Subcontinent. The world knows him by the name of “Chanakya”.

So, the fear of the Chinese government was not unusual, they had to save themselves and the only option left was to forcefully suppress these scholars. The monastery with crimson painted houses spread in a large swath of area of the snow-covered Himalayas was to be demolished.

In June 2016, the Chinese government issued directives to cut down the number of residents to 5000 from the existing over 40,000. The official reason given was over-crowding, but the real reason was well known to the world. It was nothing but fear of getting uprooted from Tibet. Overcrowding cannot be the reason as the area was very vast & could have accommodated even few lakhs residents easily.

Soon the wooden cabins, houses, Small worship places, Eateries & other structures were brought down using chain saws, JCBs, Dozers & other earthmoving equipment. As per estimates, more than 5,500 houses were broken in a short span of three months and more than 10,000 Residents were forced to abandon their studies to return to their native places.

In addition to that more than a thousand Tibetan monks & more than 2000 Nuns were also forced to leave the city.

As per a report published in freetibet.org, the priests and nuns displaced from Larung Gar were taken to correction centres where they were forced to undergo a so-called “Patriotic Re-Education”. Same is happening to Uighur Imams in Xinjiang province.

Within a year, the Chinese Government appointed three of the Communist party officials to head the prestigious “Larung Gar Buddhist Institute”, an education centre which was supposed to be headed only by high ranking Buddhist priests.

Not only this, they appointed another three senior Communist Party officials to head “Larung Gar Monastery Management Committee”, an umbrella organisation taking care of the residents and religious places.

Not only this, the Chinese government settled a large number of Han Chinese people in this area in the name of tourism. The ulterior motive was to change the demography of ethnic Tibetan people. The Tibetan government in exile protested to the United Nations but had no effect. The voice had fallen in the deaf ears.

Some of the scholars took refuge in another Buddhist education centre located about 300 Km away in Yarchen Gar but the shadows of Chinese Han government reached there too and in 2019, Yarchen Gar suffered the same fate as Larung Gar. All in the name of overcrowding and promoting tourism. 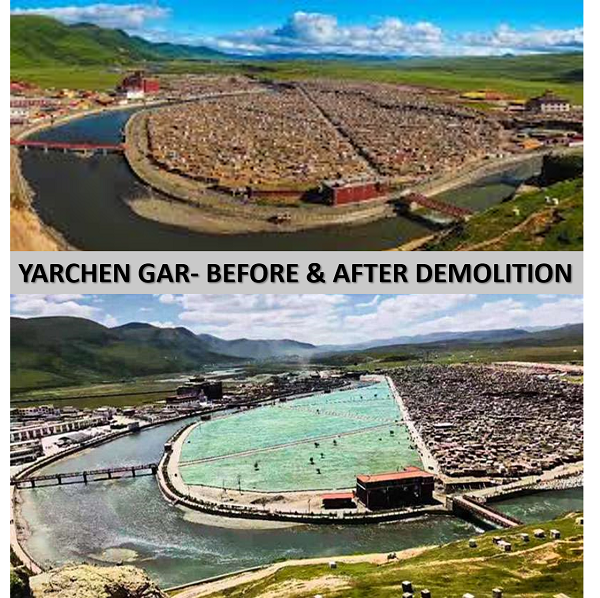 Some of the big questions lie ahead. Whether it is Tibetan Concentration camps, Fall of esteemed education institutes like Larung Gar and Yarchen Gar or for that sake the atrocities on Uighurs in Xinjiang.

Who will question the Chinese Communist Party and their ideology? Will the so-called humanitarian organisations including the United Nations ever speak on it? Who will be responsible for this ethnic cleansing of minorities in China?

(Amit Bansal is a Defence Strategist with keen interests in International Relations and Internal Security. He is also an author, blogger and poet.)

The views and opinions expressed in this article are those of the author and do not necessarily reflect the official policy or position of India.com. The writer is solely responsible for any claims arising out of the contents of this article.