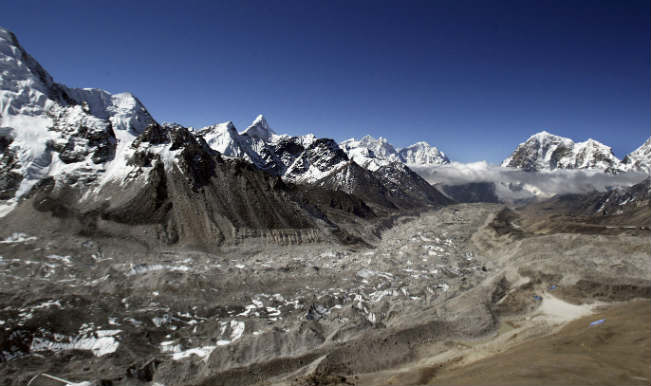 New Delhi, May 27: Over 70 percent of the glacier volume in the Mount Everest region in the Himalayas could be lost in 85 years if greenhouse gas emissions continue to rise, a new paper suggests. It also indicates more flood risk in the future in the Kosi river downstream from Nepal to India. The paper, “Modelling glacier change in the Everest region, Nepal Himalaya”, published on Wednesday in The Cryosphere, a journal of the European Geosciences Union (EGU), said the glacier volume could be reduced between 70 and 99 percent by 2100.

It is a first approximation to how the Himalayan glaciers will react to increasing temperatures in the region. The results depend on how much greenhouse gas emissions continue to rise and on how this will affect temperature, snowfall and rainfall in the area. A team of researchers from Nepal, France and the Netherlands have found the Everest glaciers could be very sensitive to future warming and that sustained ice loss through the 21st century is likely. (READ: ‘Chasing Ice’ captures largest glacier calving in Western Greenland; define distressing effects of global warming)

If greenhouse gas emissions continue to rise, the glaciers could experience dramatic change in the decades to come, said the study. “The signal of future glacier change in the region is clear: continued and possibly accelerated mass loss from glaciers is likely given the projected increase in temperatures,” said Joseph Shea, a glacier hydrologist at the International Centre for Integrated Mountain Development (ICIMOD) in Kathmandu.

“Our results indicate that these glaciers may be highly sensitive to changes in temperature and that increases in precipitation are not enough to offset the increased melt,” Shea said. Increased temperatures will not only increase the rates of snow and ice melt but can also result in a change of precipitation from snow to rain at critical elevations, where glaciers are concentrated. Together, these act to reduce glacier growth and increase the area exposed to melt, said the leader of the study.

The researchers studied glaciers in the Dudh Kosi basin in the Nepal Himalayas, which are home to some of the world’s highest mountain peaks, including Mt Everest, and to over 400 sq km of glacier area. “Apart from the significance of the region, glaciers in the Dudh Kosi basin contribute meltwater to the Kosi river, and glacier changes will affect river flows downstream,” Shea said.

Changes in glacier volume can impact the availability of water, with consequences for agriculture and hydropower generation. While increased glacier melt initially increases water flows, ongoing retreat leads to reduced meltwater from the glaciers during the warmer months, with greatest impact for the local populations before the monsoon when rainfall is scarce, said the paper.

Glacier retreat can also result in the formation and growth of lakes dammed by glacial debris. Avalanches and earthquakes can breach the dams, causing catastrophic floods that can result in river flows 100 times greater than normal in the Kosi basin. The Kosi river is known as the “sorrow of Bihar” as it has caused widespread damage in the past due to flooding and frequent change in its course.

To find out how glaciers in the region will evolve in the future, the researchers started by using field observations and data from local weather stations to calibrate and test a model of glacier change over the past 50 years. “To examine the sensitivity of modelled glaciers to future climate change, we applied eight temperature and precipitation scenarios to the historical temperature and precipitation data and tracked how glacier areas and volumes responded,” said study co-author Walter Immerzeel of Utrecht University in the Netherlands.

“Our estimates need to be taken very cautiously, as considerable uncertainties remain,” said Patrick Wagnon, a glaciologist at the L’Institut de Recherche pour le Developpement in Grenoble in France. The paper stresses that “the signal of future glacier change in the region is clear and compelling” and that decreases in ice thickness and extent are expected for “even the most conservative climate change scenario”.