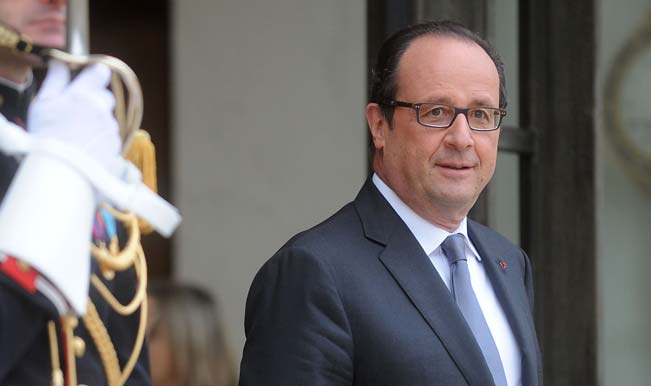 Paris, Sep 25: French President Francois Hollande Thursday announced a three-day period of national mourning after a French tourist, kidnapped by militants in eastern Algeria, was beheaded. Flags will fly at half-mast on every public building across the country from Friday to Sunday, Xinhua cited Hollande as saying at a weekly cabinet meeting. Also Read - New York: 2 Killed, 14 Injured After Shooting at a Party in Rochester

Herve Gourdel, a 55-year-old mountain guide, was abducted in Tizi Ouzou, eastern Algeria, by the Jund al-Khilafah or the Caliphate Soldiers, a splinter group linked to Islamic State (IS) militants in Iraq and Syria after the IS called on followers to attack Westerners whose nations have joined a coalition to fight the jihadi group. Also Read - 19 Years of 9/11: Lesser-Known Facts About the Dreadful Terror Attack That Shook The World

“Herve Gordel was killed because he was French. Facing this important and serious terror threat, determination, sangfroid and vigilance to protect French expatriates and citizens are required, ” Hollande said before meeting his military advisors and concerned ministers on French airstrikes against IS positions and terrorism threats.

Hollande confirmed Wednesday the death of a French man abducted in Algeria. At a UN General Assembly meeting in New York, Hollande affirmed that Gourdel, 55, seized by the Jund al-Khilafah group, was “cowardly and cruelly murdered”. “This assassination will reinforce our determination to continue fighting terrorism everywhere. We will continue the combat against IS. Military airstrikes will therefore continue,” Hollande stressed.

The French president said he will head a defence meeting at the Elysee Thursday to discuss Paris’s military operation in Iraq and ways to ensure expatriates and citizens safety. In a video footage, the IS had urged followers to attack Westerners whose nations have joined a coalition to fight the jihadi group after France launched, last Friday, its first air raids destroying IS targets.

France raised the threat level to 30 of its embassies across the Middle East and Africa, urging its expatriates to show high vigilance and to closely follow the ministry’s security recommendations.