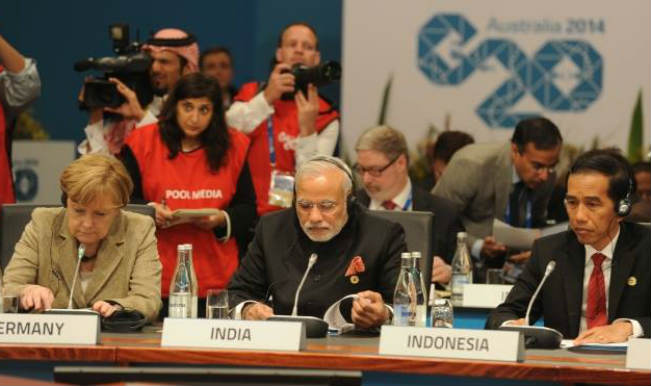 Brisbane, Nov 16: G20 leaders on Sunday stressed the need to strengthen global institutions to raise growth and deliver quality jobs. In a communique issued after the leaders’ two-day summit against the backdrop of a modest and uneven global economic recovery, the G20 nations welcomed the increased representation of emerging economies on the Financial Stability Board (FSB) and agreed to maintain a strong, quota-based and adequately resourced International Monetary Fund (IMF). Also Read - WHO's Emergency Use Approval For Covaxin Will Facilitate Our Process to Help Other Countries: PM Modi at G20

“We are deeply disappointed with the continued delay in progressing the IMF quota and governance reforms agreed in 2010 and the 15th General Review of Quotas, including a new quota formula,” said the communique. The implementation of the 2010 reforms remains our highest priority for the IMF and we urge the US to ratify them. Read: G20 Summit: Leaders are disappointed over slow pace of IMF quota reforms Also Read - PM Modi Embarks On 3-Day Visit to Rome, The First by an Indian Prime Minister in 12 Years | Here's What is on Agenda

The leaders agreed that they would work to ensure their bilateral, regional and multilateral agreements complement to one another, that they are transparent and contribute to a strong multilateral trading system under the World Trade Organization (WTO) rules, according to Xinhua.  The breakthrough between the US and India was hailed by the G20 as it would help the full and prompt implementation of the Trade Facilitation Agreement and included provisions on food security.

“We are committed to implement all elements of the Bali package and to swiftly define a WTO work programme on the remaining issues of the Doha Development Agenda to get negotiations back on track,” reads the communique. The G20 Principles on Energy Collaboration were endorsed to reinforce collaboration on energy and an Action Plan for Voluntary Collaboration on Energy Efficiency was also agreed upon, according to the communique.

The leaders reiterated support for strong and effective actions to address climate change by working to adopt a protocol under the UN Framework Convention on Climate Change (UNFCC) that is applicable to all parties at the 21st Conference of the Parties (COP21) in Paris in 2015.