'Let the buildings burn... Put those officers in jail': Owner of Bangladeshi-Indian restaurant restaurant, Gandhi Mahal, wants justice served to George Floyd despite his property burnt down amid protests in Minneapolis

Unperturbed by the tear gas that they were treated with, the crowds seeking justice for George Floyd turned violent and even set a Bangladeshi-Indian restaurant, Gandhi Mahal, on fire while setting other properties ablaze. George Floyd, a 46-year-old restaurant worker, was mercilessly kneeled on the neck and killed by a Minneapolis officer in public after being wrongly accused.Also Read - IND vs SA Dream11 Team Prediction, Fantasy Cricket Hints India vs South Africa 1st ODI: Captain, Vice-Captain, Playing 11s For Today's India vs South Africa ODI, Injury And Team News of Match at Boland Park, Paarl at 2.00 PM IST January 19 Wednesday

Gathering at the same intersection where Floyd was pinned to the ground, the protestors chanted “No justice, no peace,” and Floyd’s last words, “I can’t breathe” as they marched to a police precinct to protest his death. The protests swelled stronger for four days in the heat of which Gandhi Mahal was burnt down. However, the owner’s daughter, Hafsa Islam revealed in a social media post about how grateful her family was to those who tried to protect the property yet, her father wants “those officers in jail” while they’ll “rebuild” and “recover” the restaurant. Also Read - SA vs Ind: Kagiso Rabada Rested for the ODI Series Against India

On the official Facebook page of Gandhi Mahal Restaurant, Hafsa shared, “Hello everyone! Thank you to everyone for checking in. Sadly Gandhi Mahal has caught fire and has been damaged. We won’t loose hope though, I am so greatful for our  neighbors who did their best to stand guard and protect Gandhi Mahal, Youre efforts won’t go unrecognized. Don’t worry about us, we will rebuild and we will recover. This is Hafsa, Ruhel’s daughter writing, as I am sitting next to my dad watching the news, I hear him say on the phone; “ let my building burn, Justice needs to be served, put those officers in jail”. Gandhi Mahal May have felt the flames last night, but our firey drive to help protect and stand with our community will never die! Peace be with everyone. #JusticeforGeorgeFloyd #BLM (sic).” Also Read - Travelling to India From UAE? Follow These Updated Travel Guidelines 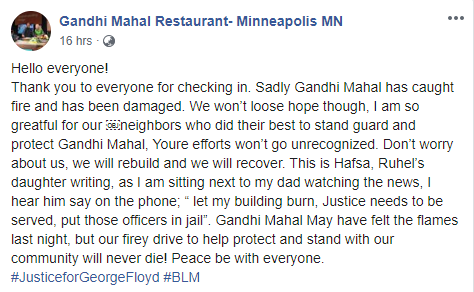 Hafsa was on her way to part-time delivery of food when she watched the officer’s brutality on George Floyd, from her car on Monday and later learnt that he had died. Gandhi Mahal is near the Third Precinct headquarters of the Minneapolis Police Department which was set ablaze by protesters on Thursday night. The fire eventually reached the restaurant while the other buildings also burned. Understanding of the crowd’s behaviour, she told the New York Times, “I understand why people did what they did. They had tried with the peaceful protesting, and it hasn’t been working.”

Opening his restaurant in 2008 and naming it Gandi Mahal in honour of Mohandas Das Karamchand Gandhi, since the owner Ruhel Islam believes in non-violence, he empathised with the protestors and said, “I am going to continuously promote peaceful ways and nonviolent movement but our younger generation is angry, and there’s reason to be angry.”

Islam family reportedly set up a makeshift field hospital in their spacious restaurant for medics and those who needed to catch their breath after inhaling tear gas. Among the 200 people who come in and out on both Tuesday and Wednesday night, the Islams revealed that one woman’s vision was damaged after being hit in the eye by a rubber bullet while the same had tore open the back of another man’s neck.

In a horrific incident of racial discrimination, three policemen were recorded on camera murdering George Floyd, as he pleaded for life. A Minneapolis officer knelt on the neck of the black man as he lay handcuffed and pleaded, “Your knee in my neck. I can’t breathe… Mama. Mama” while bystanders recorded the scene on their cameras. The cops even taunted, “get up and get in the car” as Floyd slowly grew silent and finally motionless. On Friday, US President Donald Trump called the demonstrators “THUGS” and even justifying the police’s violent behaviour towards them which resulted in Twitter flagging his tweet for “glorifying violence.”