Three firefighters were missing and feared dead today after a ferocious blast tore through a fuel depot and sparked a fire that threatened to engulf a nearby filling station on the outskirts of Ukraine's capital Kiev. 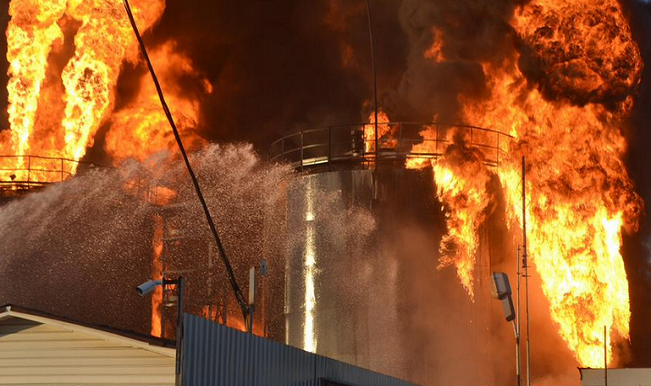 Kiev, Jun 9: Three fire fighters were missing and feared dead today after a ferocious blast tore through a fuel depot and sparked a fire that threatened to engulf a nearby filling station on the outskirts of Ukraine’s capital Kiev. Videos posted on the Internet showed the force of the explosion and the heatwave it produced setting aflame several fire trucks and ambulances that were rushed to the scene this morning. (Read: Berlin knew Ukraine flight dangers before MH17 crash suggests German media reports) Also Read - Video: Property Worth Crores Gutted In Fire At Powerloom Unit In Maharashtra’s Thane | Watch

“Everything is on fire,” a voice in one of the videos posted on YouTube said. A fireman wearing a silver heat-resistant suit and mask was seen running away from the spot of the disaster for safety. “Everyone — leave. Whoever is still here — leave,” one fireman said in a video. Interior Minister Arsen Avakov said the initial explosion hit a fuel depot near the Vasylkiv village some 30 kilometres southwest of Kiev. Also Read - Fire Breaks Out At Godown In Mumbai’s Madanpur, 8 Fire Tenders Rush To Spot

“Gigantic. Firemen have died,” Avakov tweeted. He later retracted his comments and said that some of those presumed to have died had been pulled out alive from the flames. “Our main problem was that there were 30 firemen in the epicentre of the blast,” Avakov told Kiev’s Channel 5 television. “Thankfully, most of them have since come out. We have no contact with three people. We are trying to find them.” A spokesman for Ukraine’s Emergencies Ministry told AFP that it was aware of six people being injured.

Kiev has been suffering from a dry heat spell for more than a week. But there was no initial information about what might have caused the blast. The fuel depot hit by the initial explosion is owned by a Ukrainian company called BRSM-Nafta that operates a chain of filling stations. The nearby filling station firm called KLO said it was also evacuating its staff from the scene. “The danger is real,” KLO co-owner Vyacheslav Steshenko told the Interfax-Ukraine news agency. Avakov told Channel 5 that the KLO station and its fuel storage tanks represented “our second threat.” “It is also in a high-risk location. And the storage tanks there are not empty, either,” Avakov said.  (picture Credit: Amanda Wills)