India-China Ladakh Stand-off: China-India Border Tensions May Spiral Out of Control: This is What Chinese Media is Saying

In 2017, when Indian troops crossed the line and entered the Doklam area to openly challenge China's territorial sovereignty, their craze was caused by such arrogance., writes the Global Times.

New Delhi: In a disparaging article, Chinese daily Global Times has attacked India, its people and also the United States for the Galwan Valley standoff in which 20 Indian soldiers have been martyred, the Indian Army has confirmed.  While both the India and China sides have suffered casualties, China is yet to confirm the number of deaths. Also Read - India-China Standoff: Aamir Khan Cancels Ladakh Shooting of Laal Singh Chaddha Due to Galwan Clash 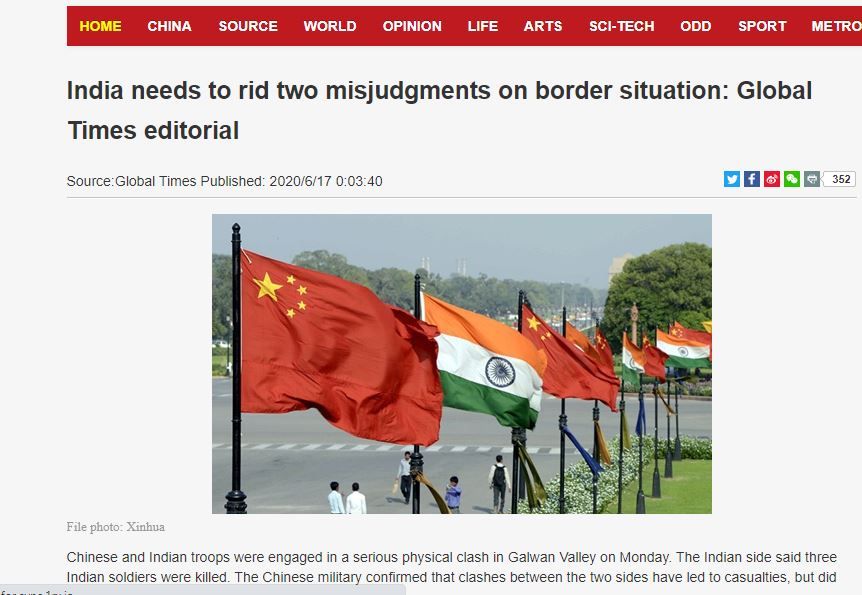 “The arrogance and recklessness of the Indian side is the main reason for the consistent tensions along China-India borders. In recent years, New Delhi has adopted a tough stance on border issues, which is mainly resulted from two misjudgments. It believes that China does not want to sour ties with India because of increasing strategic pressure from the US, therefore China lacks the will to hit back provocations from the Indian side. In addition, some Indian people mistakenly believe their country’s military is more powerful than China’s. These misperceptions affect the rationality of Indian opinion and add pressure to India’s China policy,” it said.

“The US has wooed India with its Indo-Pacific Strategy, which adds to the abovementioned misjudgment of some Indian elite. In 2017 when Indian troops crossed the line and entered the Doklam area to openly challenge China’s territorial sovereignty, their craze was caused by such arrogance. Such an aggressive posture has won praise from the Indian public, which means that the Indian elite’s mentality toward China is unhealthy and dangerous,” it said dragging the US.

“The clash in the Galwan Valley this time has led to casualties on both sides, indicating China-India border tensions, amid constant frictions, may spiral out of control. We notice that the leadership of the two militaries has exercised restraint after the incident, indicating that both sides would like to handle the conflict peacefully and not let the conflict escalate. It is noteworthy that the Chinese side did not disclose the number of casualties of the Chinese military, a move that aims to avoid comparing and preventing confrontational sentiments from escalating,” the article said.