French President Francois Hollande would chair a high-level meeting in Paris tomorrow to thrash out the finer details of the nearly USD 5 billion deal for the sale of 36 Rafale jets to India in flyaway conditions. 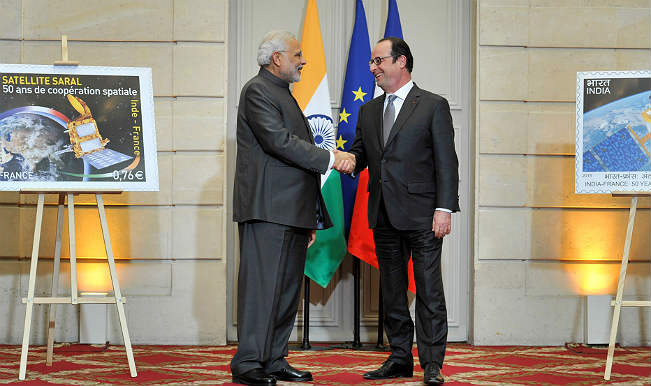 Paris/New Delhi, Apr 12: French President Francois Hollande would chair a high-level meeting in Paris tomorrow to thrash out the finer details of the nearly USD 5 billion deal for the sale of 36 Rafale jets to India in flyaway conditions. French sources said the meeting at the Elysee Palace would be held between Hollande, his top officials and executives from Dassault Aviation, the manufacturers of the Rafale jets.Also Read - Cyclone Jawad To Hit Odisha, Andhra Pradesh Tomorrow, NDRF Deploys 64 Teams in 3 States | Key Points

Prime Minister Narendra Modi, who concluded his four-day visit to France today, had asked France to supply 36 Rafale jets in flyaway conditions as soon as possible in view of the critical operational necessity of the Indian Air Force (IAF). The deal would be between the two governments. (Also read: Francois Hollande strongly backs India’s bid for permanent membership of UN Security Council) Also Read - Delhi-Dehradun Economic Corridor: You Will Soon Reach Delhi From Dehradun in Just 2.5 Hours | All You Need to Know

“There was nobody, either from Indian side or the French side, when the two leaders spoke about the Rafale. Everyone would be briefed in detail on Monday about what transpired and discussions would be held on how it can be taken forward,” sources said. Defence Minister Manohar Parrikar has said that the 36 Rafale fighter jets would be inducted into the IAF in two years. Also Read - BSF Celebrates 57th Raising Day, To Exchange Sweets With Pakistan On Attari-Wagah Border

Sources said that two years is a fair time as a final contract needs to be negotiated and signed while production of planes will also take time. The capacity of the Dassault plant is 36 aircraft per anum and the Indian version of the aircraft will have to be fine- tuned as per its requirement. “The French already have an order from Egypt for 24 Rafale jets which has to be also delivered as soon as possible” sources said, pointing out that specific timelines will have to be worked out.

One of the options that is being looked at is putting on hold the order for the French military and diverting them to meet India’s immediate requirements. Another issue that will come up for discussion is the pricing and also if the French government will be providing a tax holiday or some other concession to Dassault to bring down the prices of the aircraft for India.

Modi and Hollande had agreed to conclude an Inter- Governmental Agreement for supply of the aircraft on terms that would be better than conveyed by Dassault Aviation as part of a separate process underway, which is the MMRCA tender. The delivery would be in time-frame that would be compatible with the operational requirement of IAF and the aircraft and associated systems and weapons would be delivered on the same configuration as had been tested and approved by IAF, and with a longer maintenance responsibility by France, a joint statement had said.

The general belief in France is that the order for 36 aircraft is different from the MMRCA tender for 126 aircraft which they believe will continue to be negotiated. It is not yet clear if the 36 jets are in addition to the MMRCA deal or whether it would be adjusted within the framework of the ongoing talks.

Under the original deal, 18 were to be bought off the shelf while 108 were to be manufactured by state-run Hindustan Aeronautics Limited (HAL). The talks have been stuck over pricing and Dassault’s refusal to stand guarantee for the jets to be manufactured by HAL. While initially the MMRCA contract was valued at about USD 10 billion, it has now shot over USD 20 billion.

The Request for Information for a Medium Multi-Role Combat Aircraft was issued in 2001 and a Request for Proposal was issued in 2007. Rafale was shortlisted in 2012. Officials from the Indian Defence Ministry as well as the IAF could not elaborate much about the deal for 36 Rafale jets saying it is being worked out by the Prime Minister’s Office.

While the 36 Rafale jets would be a shot in the arm of the IAF, it will not be able to counter the dwindling air power of the force. While the sanctioned strength of the IAF is 42 Squadrons, it is currently equipped with only 34.

Adding to the trouble is the phasing out of the ageing MiG 21s and MiG 27s in the coming years. Their draw-down is scheduled to start in 2017 but sources indicated that it might be extended for another year. “There is a serious problem as new planes need to be inducted to make up for the phasing out. Then new planes are also needed to boost up our strength to the desired levels,” Defence sources in New Delhi said.

Yesterday Parrikar had said that the deal struck with France for purchase of 36 Rafale fighter jets will bring some “oxygen” to the IAF. IAF has been banking on the Rafale, the indigenously developed Light Combat Aircraft — Dhruv, and the Fifth Generation Fighter Aircraft deal with Russia, all the three of which are running behind schedule.