31-year-old Indian-origin Islamic State suspect, who is fighting in Syria, has posted a picture of him on Twitter posing with an AK-47 rifle and his new born baby 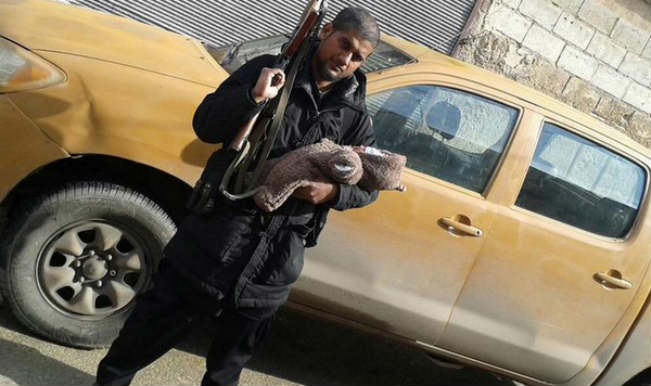 London, Nov 26: A 31-year-old Indian-origin Islamic State suspect, who is fighting in Syria, has posted a picture of him on Twitter posing with an AK-47 rifle and his new born baby. Abu Rumaysah who was born as Siddhartha Dhar, posted the photo on Twitter this morning, proudly showcasing his pleasure that his son will grow up in the Islamic State, the Independent reported today. Also Read - Donald Trump Announces Plans To Launch Own Social Media Platform Named 'TRUTH Social'

He was arrested in September in the UK along with eight others on suspicion of encouraging terrorist offences. Dhar was released on bail to reappear in December but he fled. Less than 24 hours after he was released on bail, Dhar took a bus to Paris with his pregnant wife and four young children. He travelled on to Syria before joining IS. Just hours after publicly declaring he had arrived in Syria, the wanted terror suspect made another surprising announcement on Twitter. He said that he had become a father to a baby boy. Also Read - Man Orders Football Stockings From Myntra & Receives A Bra Instead, Tweet Leaves Netizens in Splits

“He is another great addition to the Islamic State. And he’s definitely not British,” Dhar said about the baby. Dhar was well-known in the UK for frequent television appearances declaring his wish to live under the so-called Islamic State that militants are fighting to establish in Iraq and Syria. Despite being subject to a travel ban, Dhar left London on a coach bound for Paris and travelled on to an unknown IS stronghold to live with his wife and four children.

“Hopefully soon we can join forces to crush the global Crusade against Islam and Muslims in the East and West,” he wrote. In an interview on Channel 4 News earlier this year, Dhar said he would happily denounce his British citizenship in order to go out to Syria and live in what he called “the Islamic State”, under “the Shariah”. “I hope that one day Britain gets to live under the Shariah as well,” he added. Up to 500 British citizens are believed to have travelled to Iraq and Syria to join IS’ battle to establish a hardline caliphate.

This photo was published on Abu Rumaysah’s Twitter handle