The Malaysian Airlines has been one of the major airline operating flights from Kuala Lampur has been in news for all the terrifying reasons after the back-to-back air disasters its flight have faced in past four months. 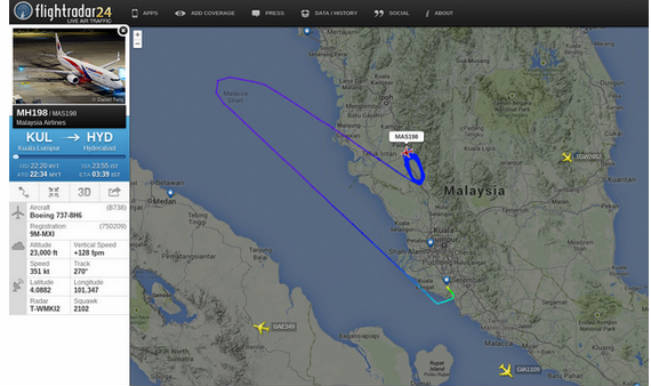 God forbid the thoughts if there was a possibility of Malaysia Airlines flight MH198 going the same way as that of the other two flights MH17 and MH370 in past five months. Malaysian Airlines was in for another difficult time as its flight MH198 making its way to Hyderabad was suddenly asked to make an emergency landing few minutes after taking off from Kuala Lampur. The reason for this untimely landing remained to be unknown but it was confirmed that the flight MH198 burnt fuel to return back to Kuala Lampur. The Malaysia Airlines Flight MH198 departed from Kuala Lampur at 10.20 pm IST for Hyderabad. Also Read - New MH17 Report 'Politically Motivated' Against Russia: Malaysia PM

The Malaysian Airlines has been one of the major airline operating flights from Kuala Lampur has been in news for all the terrifying reasons after the back-to-back air disasters its flight have faced in past four months. Two of its international passenger flights MH17 and MH370 met with tragic ending leaving no survivors on board and just the thought of flight MH198 in line to complete the hattrick of this tragic series of disasters send chills down the spine. Also Read - Australia: Memorial Planned Honouring Passengers, Crew of Malaysian Airlines MH370 Scrapped After Relatives of Victims Protest

On the ill-fated day of July 17, 2014, Malaysia Airlines Flight 17 on its route from Amsterdam to Kuala Lampur was apparently shot down for it has not been yet confirmed, two months after the tragic event. All 298 passengers with 15 crew members on board were killed. Called an action by the Pro-Russian Separatists, this incident took place near near Torez in Donetsk Oblast, Ukraine, an Ukraine–Russia border. It has been called the deadliest airline shootdown in history and seventh deadliest air history in history of Ukraine.

Coming to the first disaster of Malaysian Airline flights in the year 2014, the one that has led to the start of this nerve-wrecking series of air disasters –Malaysian Airline Flight MH370, it is more horrifying than anything than the world has seen. The sudden disappearance of an airline from the horizon of earth as if it never existed can only explain its gravity of this incident. Malaysian Airline flight MH370 carrying 227 passengers from 15 nations and 12 crew members were  on their way to Beijing from Kuala Lampur when a Boeing 777-200ER lost contact with the air-traffic control just minutes after take-off. The disappearance of flight MH370 has become a point of discussion as even after a multinational search operation that has become the most expensive search operation till date, the mystery continues to deepen. There has been no confirmation over its crash site or debris of the airline.

Malaysian Airlines due to these past consecutive air disasters has not only come in eye of suspicion of the passengers but also losing the faith of the trusted passengers over the decades resulting in economic breakdown as many would like to suggest. Whatever the case maybe, one can only sympathize over the fact that the airline need help as said by some of its trusted passengers in its difficult time. And the unforeseen disaster related to Malaysian Airline flight MH198 been avoided should bring smiles than sweats for now!