Pakistan's intransigence today led to the failure of the SAARC Summit to reach agreements on greater connectivity among the eight member nations on its opening day which was marked by Prime Minister Narendra Modi firmly asking the members to fulfill their commitment to combat terrorism. 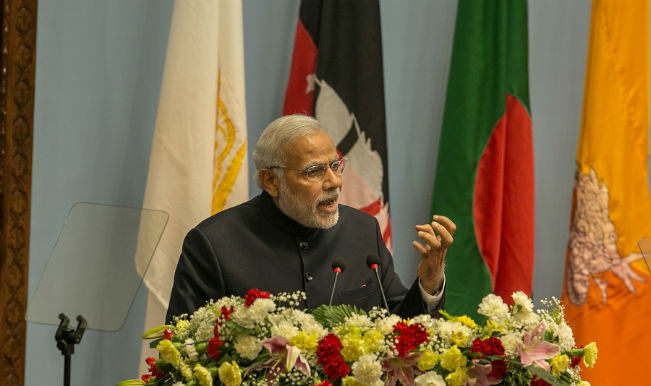 Kathmandu, Nov 26: Pakistan’s intransigence today led to the failure of the SAARC Summit to reach agreements on greater connectivity among the eight member nations on its opening day which was marked by Prime Minister Narendra Modi firmly asking the members to fulfill their commitment to combat terrorism. As the opening of the summit coincided with the sixth anniversary of Pakistan-sponsored 2008 terror attacks in Mumbai which left 166 people dead, Modi told his Pakistani counterpart Nawaz Sharif and six other leaders that “we feel the endless pain of lost lives.” Also Read - Legendary Gujarati Actor Naresh Kanodia Passes Away Due to COVID-19 at 77, PM Modi Mourns

Sharif on his part totally skipped any reference to the issue of terrorism, on which other leaders including new Afghan President Ashraf Ghani and Sri Lankan President Mahinda Rajapaksa spoke in their speeches. Rajapaksa said, “Terrorism still remains fundamental security challenge both regionally and internationally… radical views of few and misplaced agenda of some others do not undermine the security and well-being of large majority of peace loving people in the region.” Also Read - Observe Festivals With Modesty, Light Lamp For Soldiers: Key Points From PM Modi's Mann Ki Baat

Ghani criticised those countries that provide safe havens to terrorists and said, “we will not allow our territories to be used against any of our neighbours. We will not permit anybody to conduct proxy wars on our soil.” Meanwhile, the possibility of even an unstructured meeting between Modi and Sharif remained a matter of speculation. Their cold vibes underlined by the fact that they did not even exchange pleasantries at the opening ceremony of the two-day summit. However, a brief chat at the retreat was still being talked about.

Pakistan also stalled the inking of connectivity agreements, including motor vehicle pact, saying it was yet to complete its “internal process”, notwithstanding SAARC countries including Sri Lanka, Bangladesh and India strongly pitching for having these deals to strengthen the people-to- people contact and movement of goods in the region. However, Nepal Foreign Minister Mahendra Bahadur Pandey told PTI that “There are some roadblocks and we are working to clear them.” He also said his country will make all efforts to ensure that the connectivity pacts, including the motor vehicle agreement, are signed before the SAARC declaration tomorrow.

Stressing the need for better connectivity in the region, Prime Minister Modi, in his speech at the 18th SAARC Summit said,”Our relations become stronger when we connect the lives of the ordinary citizens of our countries. That is why connectivity and services by rail and road are so important. We should also connect ourselves more by air.” He said, “For India, our vision for the region rests on five pillars ? trade, investment, assistance, cooperation in every area, contacts between our people ?- and, all through seamless connectivity.” While Rajapaksa said better connectivity will help economic integration and will boost people-to-people contact in the region, Bangladesh Prime Sheikh Hasina said her country was in favour of early signing of the regional motor vehicle and railway agreements and emphasised that the pacts will help trade.

In his nearly 30-minute address at the summit, Modi also said that as SAARC “we have failed to move with speed that our people expect” which some argue was due to a development gap. “Or, is it because we are stuck behind the walls of our differences and hesitant to move out of the shadows of the past”, he asked, asserting that, “this won’t resolve our differences, but will certainly deprive us of opportunities.” Modi said barriers of boundaries inhibit progress and international partnerships add speed to it.

“Because, in the life of an individual or a nation, a good neighbourhood is a universal aspiration,” he said. Modi assured a level-playing field to companies in the SAARC countries to do business in India. “We will address your concerns and give you a level playing field in India. But, I encourage you to attract Indian investments to produce for the Indian market and create jobs for your youth. “I also look to a future when your companies can easily raise funds in India for investments at home; and, when we have cross-border industrial corridors, so that we can take advantage of the natural synergies and connected lives in our border states,” he said.

Modi also announced that said India will provide immediate medical visa for patient and an attendant coming for treatment as well as business visa for 3-5 years for SAARC nations. Identifying health as a major sector for cooperation among the member countries, Modi said India will support monitoring and surveillance of polio-free countries, and provide vaccines where it might reappear. “In the area of health, India will meet the shortfall in funds to establish the SAARC Regional Supra Reference Laboratory for TB and HIV. We offer the five-in-one vaccine for the children of South Asia,” he said.

Talking about education, Modi said India was prepared to connect the South Asian students through online courses and e-libraries and offered to extend India’s National Knowledge Network to SAARC region when it is ready. Referring to space technology, Modi said India’s “gift” of a dedicated satellite for the SAARC region has been planned for launch in 2016. Underlining the need for removing the perception of “cynicism and skepticism” about SAARC, he said Indian companies were investing in billions abroad, but less than 1 per cent flow into the region. Talking about India’s bilateral ties with each of the SAARC nations, Modi said India and Bangladesh have deepened their links through rail, road, power and transit while India and Nepal have started a new era of cooperation in energy.

“We will soon launch a new arrangement to meet the Maldives’ need for oil,” he said. Noting that a good neighbourhood is a universal aspiration, Modi said: “If we are sensitive to each other’s security, and the lives of our people, we will deepen friendships, spur cooperation and advance stability in our region.” “Big and small, we face the same challenges — a long climb to the summit of development. But, I have great belief in our boundless potential; and, confidence — that comes from the many inspiring stories of innovation and initiative in each of our countries,” he said.