Most of experts participating in the evening shows urged the two sides to start peace talks. 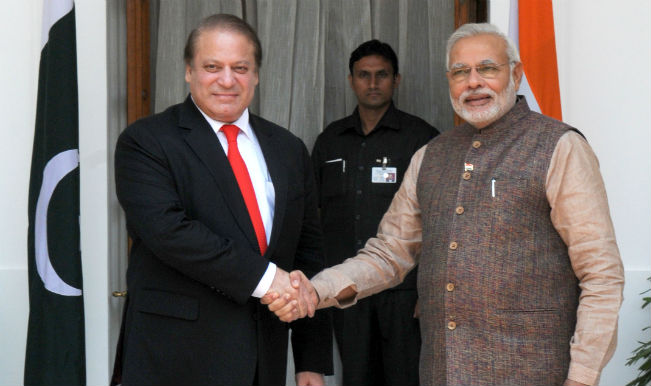 Islamabad, Nov 28 : The warm handshake and a brief chat between Prime Minister Narendra Modi and his Pakistani counterpart Nawaz Sharif was given prominent coverage today in the Pakistani media which said the interaction salvaged the SAARC Summit. All leading newspapers ran the news about their interaction as a front page lead with a photograph of the two leaders smiling. Dawn reported that a brief meeting between Prime Ministers Sharif and Modi yesterday salvaged the SAARC summit, with all eight countries clinching a last-minute deal to create a regional electricity grid. Also Read - Give Concrete Solutions, Not Plain Speeches: Congress Slams PM Modi Over His Address to Nation

“Mr Sharif and Mr Modi caused a stir with their handshake at Dhulikhel, site of the retreat. The two leaders held each other’s hand for nearly 30 seconds. They also smiled and exchanged pleasantries,” the paper said. It said Kathmandu’s City Hall broke into loud applause as Sharif and Modi warmly shook hands, putting an end to the stiff statements by their foreign offices that ruled out a “structured” or “formal” meeting. The News reported that after weeks of speculation and tension, the leaders of Pakistan and India finally shook hands, breathing a fresh lease of life into the eight-member South Asian Association for Regional Cooperation. Also Read - Anticipating Backlash, BJP Turns Off 'Dislike' Button on YouTube Channel Amid PM Modi's Address to The Nation

“Prime Minister Nawaz Sharif and Prime Minister Narendra Modi created a stir as the concluding session of the 18th Saarc summit finally saw a warm handshake between the two. They shook and held each others’ hand for nearly 30 seconds. They also smiled and exchanged pleasantries,” the paper said. The Express Tribune reported that the “informal interaction between Nawaz and Modi at a retreat in Kathmandu helped cool down the temperature” and helped the summit to move forward.

The Nation in its report said that the interaction between the two leaders salvaged the summit and helped the group to sign an important energy deal at the end. TV channels also aired talk shows highlighting the importance of the brief interaction. Most of experts participating in the evening shows urged the two sides to start peace talks.