Nepal: US-Bangla Airlines Plane With 71 On Board Crash-Land Kathmandu Airport, At least 50 Killed

Media reports said that a plane from a Bangladeshi airline crashed at the runway.

New Delhi, March 12:  An aircraft of the US-Bangla Airlines crashed close to the Tribhuvan International Airport (TIA) in Kathmandu on Monday afternoon killing at least 50 passengers. The 78-seater aircraft was carrying 67 passengers when it veered off the runway while landing at 2.20 PM and crashed onto a ground near the airport, catching fire.

Photos and videos being shared on social media show thick, black smoke billowing out from the runway of Kathmandu airport. (Also Read: Nepal Plane Crash: What we Know so Far)

According to TIA spokesperson Prem Nath Thakur the aircraft belonging to US-Bangla Airlines careened off the runway during landing and crashed onto a football ground near the airport, catching fire. 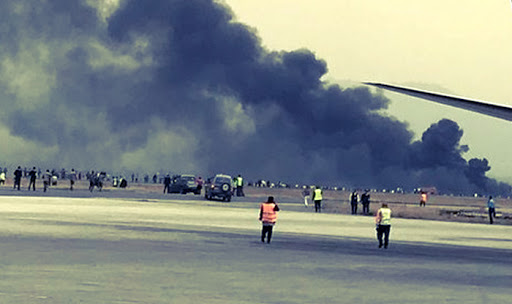 Thick, black smoke was seen billowing out from the plane which crash-landed in Kathmandu.

The aircraft has been identified as Bombardier Dash 8 Q400.

“The aircraft was permitted to land from the Southern side of the runway flying over Koteshwor but it landed from the Northern side,” said Gautam, adding that the aircraft might have sustained some technical glitches.

“We are yet to ascertain the reason behind the unusual landing,” he said.