In its letter to the states, the Centre said multiple cases of this new variant have been reported in Botswana (3 cases), South Africa (6 cases) and Hong Kong (1 case).

New Delhi: The Central government on Thursday warned all states and Union territories to be extra cautious in view of a new Covid variant being detected by South African scientists. The Centre’s warning is regarding international passengers travelling from or through Botswana, South Africa and Hong Kong after the new variant (B.1.1529) has been reported in these countries.Also Read - Omicron: Tunisia Confirms First Case of Omicron Variant; Strain Found in Citizen Returning From Istanbul

“It is imperative that all international travellers travelling from and transiting through these countries and also including all other ‘at risk’ countries are subjected to rigorous screening and testing. The contacts of these international travellers must also be closely tracked and tested,” Health secretary Rajesh Bhushan wrote to states and UTs. Also Read - Is Omicron Severe Than Other Variants of Coronavirus? Here Are The Answers

In its letter to the states, the Centre said multiple cases of this new variant have been reported in Botswana (3 cases), South Africa (6 cases) and Hong Kong (1 case). “This variant is reported to have a significantly high number of mutations and thus has serious public health implications for the country, in view of recently relaxed visa restrictions and opening up of international travel,” the Centre said. Also Read - Amid Omicron Surge, South Africa Witnesses Second-Highest Covid Infection in Children Under 5

Read the full advisory issued by Centre to states/UTs here: 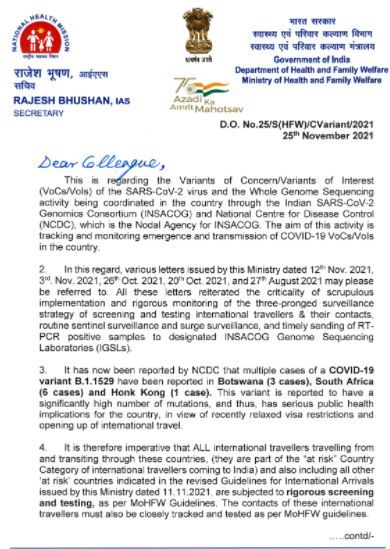 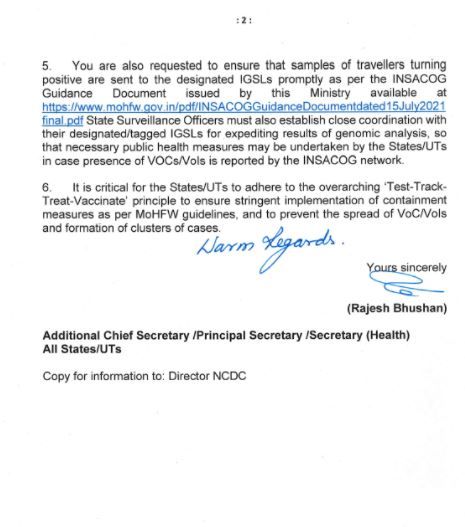 Scientists in South Africa are studying a recently identified new coronavirus variant that is a cause for serious concern, stoking fears the country may face a potentially severe fourth wave that could spread internationally, according to reports. The new discovery, called B.1.1529 until a Greek letter is assigned, most likely to be called ‘Nu’ carries an unusually large number of mutations and is “clearly very different” from previous incarnations, Tulio de Oliveira, a bio-informatics professor who runs gene-sequencing institutions at two South African universities, said at a briefing on Thursday.