The letter says that if Trump thinks that he will bring North Korea "to its knees through nuclear war threat, it will be a big miscalculation and an expression of ignorance.

New Delhi, Oct 20: Australia has received a letter from North Korea in which the latter has declared itself as a solid nuclear power and accused White House of driving the world to a nuclear disaster. The letter was termed as “unprecedented” by Julie Bishop- the foreign minister of Australia, reported CNN.Also Read - Viral Video: Man Asks Barber to Give Him a Kim Jong-un Haircut and the Result Left him Laughing Hard | WATCH

The letter says that if Trump thinks that he will bring North Korea “to its knees through nuclear war threat, it will be a big miscalculation and an expression of ignorance. Also Read - North Korea Test-fires New Long-range Cruise Missiles With Possible Nuclear Capability: Report

It appears as if the letter was dispatched on September 28 that is a week after US President Donald Trump’s address to the United Nations General Assembly where had stated that there was no option but to destroy North Korea completely. Also Read - Ease Travel Restrictions: India Urges Australia to Address Difficulties Being Faced by Its Students

Australia’s prime minister dismissed the letter from North Korea to the Australian Parliament and other countries as a “rant” against President Donald Trump and a sign that Pyongyang is “starting to feel the squeeze” of escalated sanctions. Prime Minister Malcolm Turnbull told that the letter was sent to “a lot of other countries” as well as Australia.

“Kim Jong-un is threatening to fire nuclear missiles at Japan, South Korea and the United States and is spreading instability around the globe, added Turnbull.

Bishop took to Facebook the post the letter of North Korea with a tag: “The collective strategies of allies and partners to impose maximum diplomatic and economic sanctions on North Korea is working.” 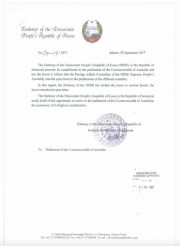 The UN sanctions have targeted North Korea from all aspects and Australia believes that sanctions seem to be working as it is getting desperate.