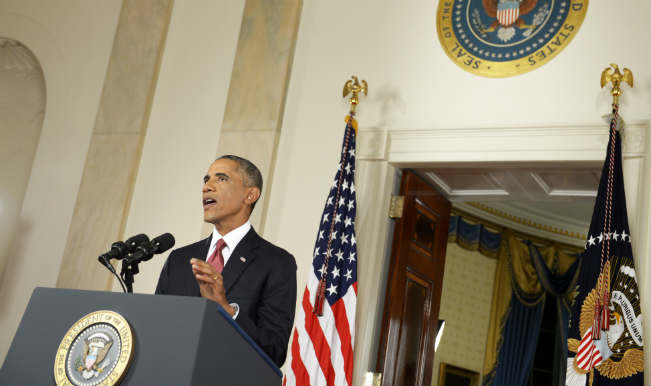 Washington, Sep 18: US President Barack Obama has applauded the “important step” taken by the House of Representatives to approve an amendment that authorises the Pentagon to train and arm Syrian rebels fighting the Islamic State (IS) terrorist group and urged the Senate to complete the task with an immediate vote. Also Read - International Flights: Saudi Arabia Suspends Flights to/From These Countries Amid Rising COVID Cases | Know Here

“The countries of the region and around the world are uniting to confront the IS. The United States can make a decisive difference in that effort,” Obama said in a statement Wednesday. “The vote today in the House of Representatives is a step to mark this difference, and I urge the Senate to pass this bill without delay,” the president said. Also Read - Saudi Man Jumps on Back of Rare Whale Shark & Rides Along While Holding Fin | Watch Viral Video

Obama’s comments came after the House passed an amendment to authorise his plan against IS in Syria with 273 votes in favour and 156 against. The Senate is expected to vote on the issue Thursday. The amendment permits the US Defense Department to increase its delivery of weapons to the opponents of Syrian President Bashar Al Assad’s regime and train them in Saudi Arabia to become an internal ally in their crackdown on IS that the US plans to extend to Syria.

“Today’s vote is a step further to train and equip selected elements of the moderate Syrian opposition to defend themselves against, and eventually combat, the forces of IS in Syria, while creating the conditions for a political solution needed to solve once and for all the crisis in Syria,” Obama said.

“This training programme will take place outside Syria, in an alliance with regional countries. There will be no American military personnel in Syria as part of this programme,” he said. The president claimed that in its successful campaign against Al Qaeda, the US has “learned that it is more effective to use their unique abilities to eliminate terrorist targets in a mission to support the efforts of its partners on the ground to ensure their own future”.

Though Obama believes that Congressional approval is not necessary to act militarily against the IS directly, it is needed for training or providing weapons to a third party, in this case the Syrian rebels, under US law. Since last year, the US has been supplying arms to and training some Syrian rebel factions in Jordan through a covert CIA programme.

Obama also met Wednesday with his national security team to talk about the “threat that foreign terrorist combatants presented to the US” who are joining the ranks of the IS, according to the White House. Over the following week, Obama will preside over a session of the UN Security Council, focusing on the foreign fighters, given that the US and Europe are increasingly concerned about those who have Western passports and who could return to their countries of origin and launch attacks.

Earlier Wednesday, Obama visited the headquarters of the US Central Command, responsible for military operations in the Middle East where he promised that the United States would not send ground troops to the conflict.