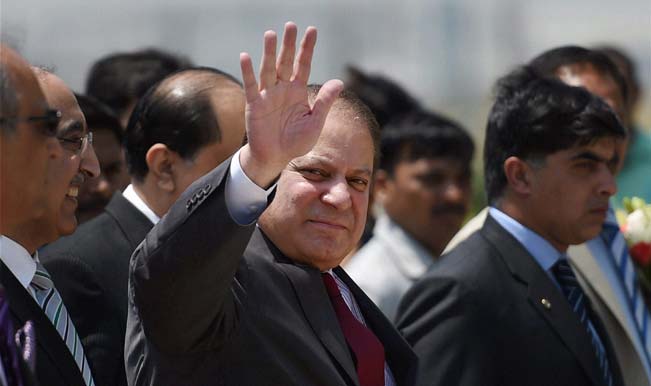 Islamabad, Sep 19: Embattled Pakistan Prime Minister Nawaz Sharif today hit back at protesters, saying no “long or short march” can derail the government, even as Imran Khan vowed to continue his sit-in indefinitely till the Premier resigns. Also Read - Leader of Pakistan Called For Action Against Those Who Incite Hate, Was he Referring to Himself? India at UNGA

Sharif, while addressing the joint session of the Parliament convened to support the Premier and discuss the current impasse, said, “the plans of nefarious elements in the country have been foiled in Parliament.” Also Read - Indian Delegate Walks Out of UNGA in Protest After Pakistan PM Imran Khan Raises Kashmir Issue

He said the government had the option of evicting the protesters from the capital but use of force could harm women and children being used as “human shields” by the protesting groups. “The prevailing situation has made Pakistan a laughing stock…These people will have to face a public court and answer for what they have done,” Sharif said. “No long march or short march can derail us from our mission of upholding democracy,” the Prime Minister said.

Highlighting the problems the sit-ins have caused, especially with regard to visits by international leaders, Sharif said, “Today the Chinese president is in India, when he was supposed to be here, in Pakistan.”

Sharif also slammed the protesters for raking the issue of rigging months after the general election last year, “I went to meet Imran Khan at his Bani Gala residence…He didn’t speak of any complaints regarding rigging…I do not understand where this rigging issue came from and how Imran is now on Constitution Avenue calling to wrap up the Parliament.”

Pakistan Tehreek-i-Insaf (PTI) Chairman Khan and fiery cleric Tahir-ul-Qadri of the Pakistan Awami Tehreek have been protesting against Pakistan government since August 14, demanding Sharif’s ouster. Khan wants Sharif’s resignation over alleged rigging in last year’s poll which his party lost, while Qadri wants to bring a revolution in the country.

Khan, while addressing his supporters in front of the Parliament last night, said his committee of negotiators had categorically told the opposition jirga that there would be no dialogue with the government until the release of PTI workers.

“I am ready to sit with the protesters at the sit-in for one year but will not leave the place without the Prime Minister’s resignation,” Khan said. “These 35 days at the sit-in were the best days of my 18-year political career and I enjoy every moment of it. There will be no worry if I don’t become Prime Minister, but it will bring great happiness to me that I have succeeded in creating awareness among the people for achieving their rights.”

Meanwhile, Qadri warned the government to avoid any crackdown on his group’s workers. “Mr Nawaz Sharif, if you try to arrest my supporters I will not spare you,” Qadri said last night.