In another shocking incident of intolerance in Pakistan, activist Sabeen Mahmud was shot dead by unidentified gunmen in Karachi on Friday. Her crime? Holding a discussion about Balochistan. Sabeen was 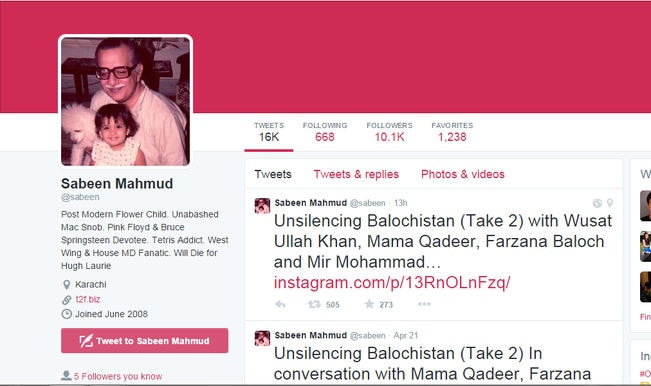 In another shocking incident of intolerance in Pakistan, activist Sabeen Mahmud was shot dead by unidentified gunmen in Karachi on Friday. Her crime? Holding a discussion about Balochistan. Sabeen was the director of The Second Floor (T2F), and she was shot when she was leaving T2F on Friday night. She died on her way to the hospital and doctors retrieved five bullets from her body. Her mother also sustained bullet wounds and is critical. Also Read - Amazon to Add Pakistan to Its Approved Sellers' List. Here's What it Means

On Friday, T2F had organised a talk on Balochistan: ‘Unsilencing Balochistan Take 2: In Conversation with Mama Qadeer, Farzana Baloch & Mir Mohammad Ali Talpur. According to its website T2F is ‘A community space for open dialogue, T2F features a café and bookshop and hosts poetry readings, meetups with writers, talks, debates, theatre performances, film screenings, open mic nights, jam sessions, and standup comedy.’ According to Wikipedia, ‘Baloch nationalism is a movement that claims the Baloch people, an ethno-linguistic group mainly found in Pakistan, Iran and Afghanistan are a distinct nation.’ PM Nawaz Sharif condemned her assassination and so far, no one has claimed responsibility for the attack. Ironically, her last tweet was about the discussion. Condolences poured in for Sabeen Mahmud on Twitter. Also Read - ICC Test Rankings - Virat Kohli Retains Fifth Place, Rishabh Pant Breaks Into Top 10

Cannot believe it. She was an amazing human being. No words, just a lump in my throat. Rest in power, Sabeen Mahmud. pic.twitter.com/xpze7C6ZNm Also Read - I Have Total Control in Team And Selection Matters: Babar Azam

Two summers ago in london i told @sabeen to be careful and she said, ‘someone has to fight.’ Goodbye, my friend. You were the best of us.

Gutted about assassination of @sabeen – warm, brave, delightful – she described herself as a fiery comet- and went in a blaze of heroism

And the pakistani state will want us to believe that ISI is gods gift to mankind. They should be ashamed. The state killed sabeen mehmud !

Be it Taliban or the agencies, the BLA or the ASWJ, the namaalom afraad or the Martians, the onus of Sabeen Mahmood’s murder is on the State

Sabeen was like titanium. So strong. So dignified. In every way. A huge supporter of all voiceless people. A voice. Ya Allah.