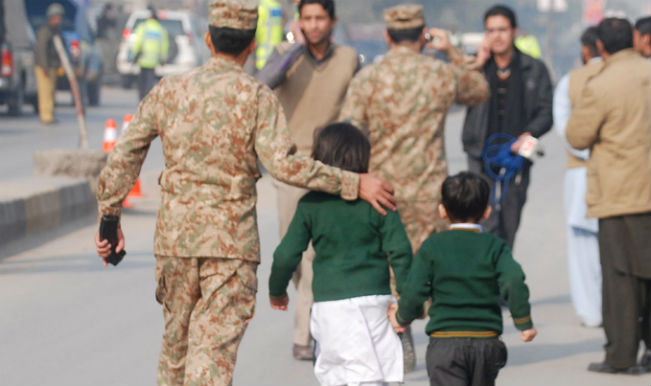 New York, Dec 20: The Pakistani government should order an immediate stop to executions of death-row prisoners for terrorism-related offenses, Human Rights Watch said today. The government executed two convicted militants in Punjab province on December 19, as an explicit reaction to the December 16 attack by the Pakistani Taliban splinter group Tehreek-e-Taliban (TTP) on a school in Peshawar in northwestern Pakistan that left at least 148 dead – almost all of them children. Also Read - Jammu and Kashmir: Pakistan Shells Mortars in Poonch District Along LoC, Indian Army Retaliates

“Pakistan’s government has chosen to indulge in vengeful blood-lust instead of finding and prosecuting those responsible for the horrific Peshawar attack. The government’s death penalty spree is a craven politicized reaction to the Peshawar killings that will do nothing to bring the attackers to justice,” said Phelim Kine, deputy Asia director at Human Rights Watch. Also Read - Outrage in Pakistan After Robbers Gang-Rape Woman in Front of Her 3 Children in Punjab Province

Punjab Home Minister Shuja Khanzada described the executions of the two men, Mohammed Aqeel and Arshad Mahmood, as a means to “boost the morale of the nation” and said that more executions would follow. Aqeel was reportedly convicted for his alleged role in a 2009 attack on army headquarters while Mahmood was linked to an assassination plot against the former president, Pervez Musharraf.

On December 18, Pakistan’s Chief of Army Staff, General Raheel Sharif, signed death warrants for six “hard-core terrorists.” Pakistan media reported that the government plans to execute at least 55 people convicted on terrorism-related charges as part of the response to the Peshawar attack. Prime Minister Nawaz Sharif, who rescinded a four-year unofficial moratorium on capital punishment in response to the attack, considers death sentences essential for “deterrence and establishment of peace,” Pakistan’s Business Recorder newspaper has reported.