The Russian economy will rebound and the ruble will stabilise, Russian President Vladimir Putin said today at his annual press conference. 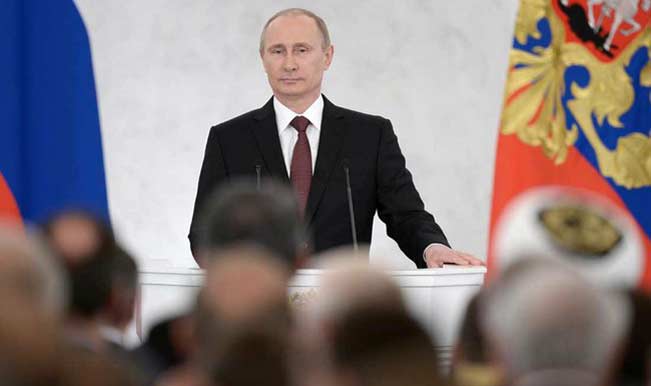 Moscow, Dec 18: The Russian economy will rebound and the ruble will stabilise, Russian President Vladimir Putin said today at his annual press conference. He said the current crisis could last two years at most, but the economy could recover faster if external factors change for the better. Putin said the government and the Central Bank are generally working correctly to deal with the current economic woes, albeit some of their action was belated. Also Read - Kejriwal Likely to Announce Series of Initiatives in Next Few Days to Revive Delhi's Economy

“The current situation has been provoked by external factors, but it’s worth noting that we haven’t done what we planned to do to diversify our economy,” Putin said, adding that the current crisis should create incentives to diversify the nation’s economy and ease its dependence on oil and gas earnings. Putin said the nation’s currency reserves are sufficient to keep the economy in stable condition, adding that the Central Bank shouldn’t aimlessly “burn” its reserves, currently standing at USD 419 billion. Also Read - Reviving Economy: Delhi Govt Forms Panel to Explore Economic Measures to Help Businesses

The government also needs to work with exporters to encourage them not to stash their hard currency earnings, to help the ruble stabilise, he said. “Our economy will overcome the current situation. How much time will be needed for that? Under the most unfavorable circumstances I think it will take about two years,” he said. Earlier, a Russian tycoon placed under house arrest in September in a move that rattled markets was released from house arrest just hours before Putin’s annual televised press conference.

A lawyer for Vladimir Yevtushenkov was quoted by Interfax news agency as saying his client had been freed. The last-minute release echoes a similar move last year, when Putin announced after his annual press conference that another tycoon, Mikhail Khodorkovsky, would be set free. “Vladimir Petrovich (Yevtushenkov) is now a free man who can work productively,” lawyer Vladimir Kozin said. Shares in Sistema, a company that Yevtushenkov controls and manages, surged by more than 30 per cent in the early hours of trading on Moscow’s MICEX stock exchange.

One of Sistema’s most lucrative assets, the oil company Bashneft, was transferred to the government this month. Yevtushenkov in September was charged with money-laundering in relation to Bashneft.