Russian President Vladimir Putin who is current in St Petersburg said that the authorities are looking into all possible motivations, including terrorism.

St Petersburg, April 3: Moments after twin explosion rocked St Petersburg, second biggest city of Russia, a report suggest that Islamic State (ISIS) supporters have started praising the ‘terror attack’ which killed at least 10 people and injured 50 others. Russian President Vladimir Putin who was at St Petersburg on Monday morning said that the ‘blasts could be terror attacks’ and also ordered a thorough inquiry into the matter. Some security experts had not yet given a clean chit to ISIS and its role behind the metro blast is investigated. In its latest edition, ISIS in its mouthpiece ‘Dabiq’, had vowed to avenge the series of airstrikes carried out by Russia targeting the group in Syria.Also Read - Independence Day 2022: Tiranga Unfurled From Parachute High In Russian Skies, Stunning Jump Of The Skydiver Takes Breath Away - Watch

In its recent edition ISIS mouthpiece ‘Dabik‘ wrote, “…the Islamic State will continue to strike Russia until Sharī’ah returns to all the lands of the Muslims usurped by the crusader Russians and until Russia pays the jizyah in humiliation”. Also Read - 5 Most Powerful Militaries In The World; Where Does India Stand

According to Vocativ, a news portal quoted a blog – al-Minbar online forum – handled by ISIS operatives saying that ISIS operatives were celebrating today’s attack in Russia. “We ask Allah to bless the operation by the lions of the Caliphate, we ask Allah to kill the Crusaders,” Vocativ quoted an ISIS supporter from the terror group’s al-Minbar online forum. Also Read – Twin explosion in Russia’s St Petersburg: 10 killed, 50 injured, ISIS role suspected – What we know so far Also Read - India Hid Russian Origin Of Shipped Fuel And That ‘Bothers’ USA: RBI Deputy Governor

The news portal further wrote that in the forum others celebrated the explosion by saying that the Monday bombs made for “a metro to hell for the worshipers of the Cross” and claimed that the attacks are a revenge for Russia’s backing of Syrian President Bashar al-Assad, who is fighting against the terror group and other rebel groups for last six years. In last two years, since Russia intervened in the Syrian civil war, the Russian airstrikes and shelling in Syria have killed hundreds of people and reduced entire areas to rubble.

The twin explosions occurred on a metro train headed from St Petersburg to the Sennaya Ploshchad and the Technology Institute stations, both in the centre of Russia’s second biggest city. Some reports suggest that the incident involved a device filled with shrapnel, according to Interfax news agency. The news agency also reported that all metro stations in St Petersburg city have been closed following the blast. 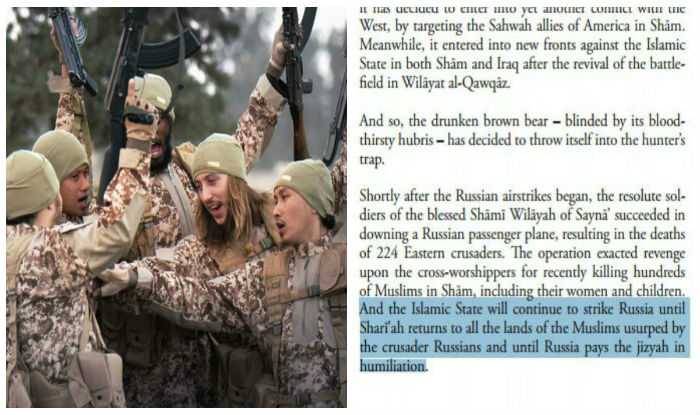 Russian President Vladimir Putin who is current in St Petersburg said that the authorities are looking into all possible motivations, including terrorism. Some photos and videos circulation on social media showed injured people lying on the floor outside the metro with a damaged door.