The total number of cases in Guinea, Sierra Leone and Liberia - the three countries hit hardest by the outbreak - is now more than 19,000. 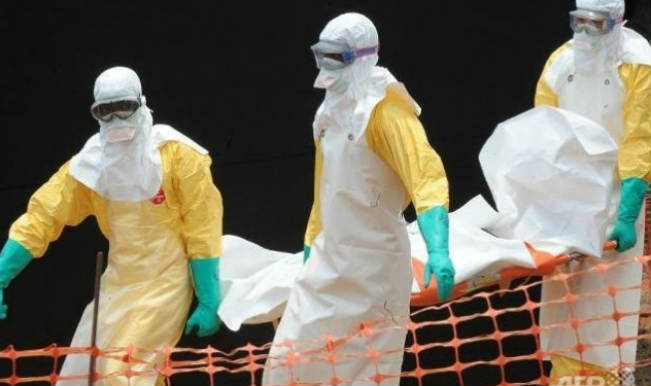 Also Read - World Zoonoses Day 2020: What is Zoonosis And How Does The Infectious Disease Spread

Washington, Dec 22: An advanced protective suit which may reduce the risk of infection for health care workers who treat Ebola patients has been developed. The suit, devised by Johns Hopkins University researchers, is one of the first five awardees in a federal funding contest in the US aimed at quickly devising new tools to combat the deadly Ebola. The Johns Hopkins prototype is designed to do a better job than current garments in keeping health care workers from coming in contact with Ebola patients’ contagious body fluids, both during treatment and while removing a soiled suit. Also Read - After Covid-19 & Measles, Congo Hit By New Ebola Outbreak; 'Can 2020 Get Any Worse' Asks Twitter

In addition, it is expected to keep the wearer cooler – an important benefit in hot, humid regions such as West Africa. The first projects selected for the federal funding were announced earlier this month by the US Agency for International Development (USAID) through its new programme, called Fighting Ebola: A Grand Challenge for Development. The precise amount of funding and other support that the USAID will award to this project is still under review. Also Read - Coronavirus-Bacteria Detector is FINALLY Here, Researchers Come up With New Portable Device

The improved protective suit is being developed by a team of medical experts, engineers, students and other volunteers under the supervision of Johns Hopkins University’s Center for Bioengineering Innovation and Design (CBID) and Jhpiego, a nonprofit Johns Hopkins affiliate that focuses on international health programmes. “The personal protection suit we are developing with our partners at the Center for Bioengineering Innovation and Design is purposefully designed to address safety and climate issues now putting health workers at risk,” said Leslie Mancuso, Jhpiego president and CEO.

Some of the enhancements in the new suit include a large clear visor in the hood, which is integrated into the suit; air vents in the hood; a rear zipper to reduce infection risks while removing the garment; a cocoon-style doffing process that requires far fewer steps than existing garments; and a small battery-powered, dry air source to cool the user by blowing air into the hood. The cooling technology used in the garment was originally developed for cooling patients in cardiac arrest by Johns Hopkins cardiologist Harikrishna Tandri.

Researchers will now proceed to fine-tune the prototype protective suit, with a goal of getting some elements of the design ready for mass production perhaps as early as April. According to The World Health Organisation, the worst Ebola outbreak on record has killed more than 7,000 people. The total number of cases in Guinea, Sierra Leone and Liberia – the three countries hit hardest by the outbreak – is now more than 19,000.