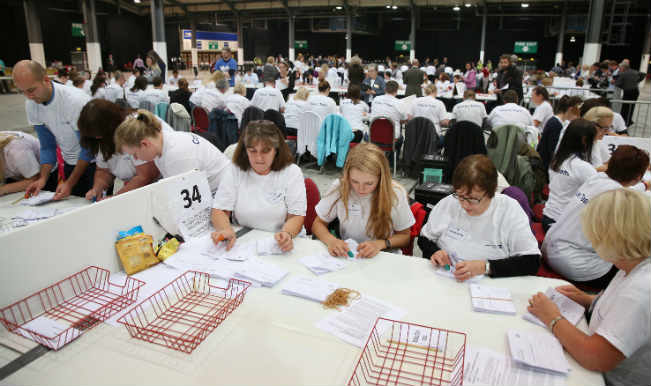 Edinburgh, Sept 19: Scotland has voted against independence in a historic referendum, the BBC forecast today after preliminary results showed 54.3 per cent voting “No” and 45.7 per cent voting “Yes”. “The BBC forecasts that Scotland has voted against becoming an independent country,” read a statement on its website. Also Read - Scotland, Wales Worry as UK Plans to Withhold State Aid After Brexit Transition

Excitement vied with apprehension as Scottish voters went to the polls on Thursday in a referendum on independence, deciding whether to dissolve a 307-year union with England that brought prosperity but has increasingly felt stifling to many Scots. As the polls closed and the vote counting began, there was a quiet thrill of history in the making on the fog-shrouded streets of Scotland’s capital, Edinburgh. Also Read - Secret Has Gone With You! Sushant Singh Rajput's MS Dhoni Co-Star Bhumika Chawala Shares Heartfelt Post

Many Scots were staying up all night in homes and bars to watch the results roll in. Eager voters had lined up outside some polling stations even before they opened at 7 am. Many polling stations were busy and turnout was expected to be high. More than 4.2 million people had registered to vote, 97 percent of those eligible, including residents as young as 16.

Early figures today indicated the turnout for Scotland‘s historic independence referendum could be the highest ever in the United Kingdom, for a vote that could break up the centuries-old union. A survey released after polling stations closed said independence could be narrowly rejected, but both “Yes” and “No” campaigners said it was too close to call as counting was underway in Scotland’s 32 voting districts.