You can hear someone saying ‘DROP THE GUN’ thrice and then five shots are fired. 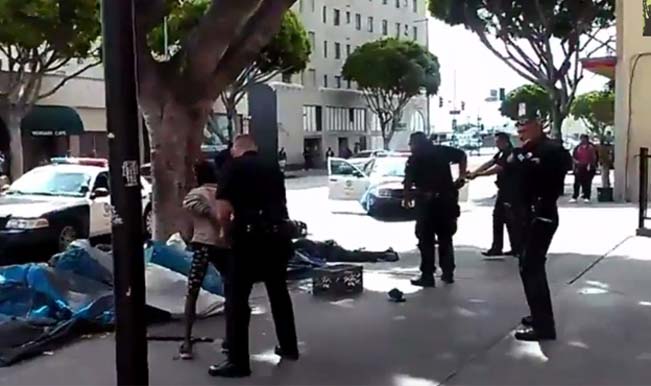 You can hear someone saying ‘DROP THE GUN’ thrice. The words are yelled at once initially and twice almost instantaneously. It is unclear if the homeless man had a gun or he was pleading for the police pointing the pistols at him but there was a lot of chaos in what looks like a pedestrian footage a few steps away from the sidewalk.

Just seconds after the sound of a taser being used you can hear a total of five shots being fired and the video shows that the homeless man on the ground just lies there without at movement, presumably dead from the five shots fired at him by the LAPD police officials.

As soon as the shots are fired, the bystanders are left shocked and in awe of the situation that six trained officers had to resort to shooting down a homeless man rather than arrest him for the felony they think he had committed.

We are in no position to judge if what the police officers did was justified or not because the entire episode where five shots were fired sounds excessive and seems like the officers intended to kill rather than control the situation by a shot to the leg which would not have been fatal in most cases.

What’s worrying is after the recent case of absolutely unnecessary and excessive force used by Alabama Police Department officers on an Indian who was walking on the sidewalk with no credible threat to anybody was tackled and left in a coma. The procedures and humanity of American police officers is being seriously questioned by the world media today. Here’s the video taken by a bystander after officers from the LAPD killed a man on the sidewalk.

An investigation has been initiated and three LAPD officers are on paid administrative leave according to a media report. The police investigation will look into the incident as more angles of the occurrence emerges along with CCTV footage from the adjacent building and the footage from the officers who were wearing bodycams. We wait for more on the developing story and will bring in more details as they are available to us.