Sony hacking an act of vandalism not war: Barack Obama

President Barack Obama today described the Sony hacking case as a costly act of "cyber vandalism", but did not call it an act of war and said the US is mulling whether or not to place North Korea back onto its list of state sponsors of terrorism. 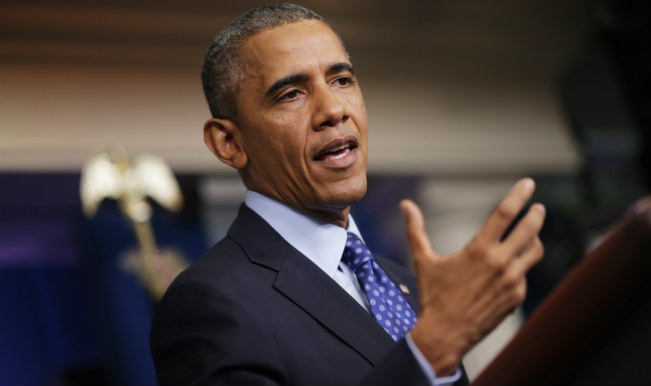 Washington, Dec 21: President Barack Obama today described the Sony hacking case as a costly act of “cyber vandalism”, but did not call it an act of war and said the US is mulling whether or not to place North Korea back onto its list of state sponsors of terrorism. “No, I don’t think it was an act of war. I think it was an act of cyber vandalism that was very costly, very expensive. We take it very seriously,” Obama said. “We’re going to review those through a process that’s already in place,” the president said in an interview on CNN’s “State of the Union.” Also Read - Craze For PlayStation 4 Amps up as Sony Promises Rs 38 Lakh For Finding Critical Bug

“And we don’t make those judgements just based on the news of the day. We look systematically at what’s been done and based on those facts, we’ll make those determinations in the future.” The FBI on Friday pinned blame on North Korea for a hack into Sony’s computer systems. Obama said both foreign governments and hackers outside government present cyber threats that are part of the modern business landscape. “We take it very seriously. We will respond proportionally, as I said,” Obama said. Also Read - Secret Has Gone With You! Sushant Singh Rajput's MS Dhoni Co-Star Bhumika Chawala Shares Heartfelt Post

“We’re going to be in an environment in this new world where so much is digitalised that both state and non-state actors are going to have the capacity to disrupt our lives in all sort of ways. We have to do a much better job of guarding against that,” he said. “We have to treat it like we would treat the incidents of crime in our countries. When other countries are sponsoring it, we take it very seriously. But that’s something that I think we can manage through, as long as public, private sector is working together,” said the US President.

Obama reiterated that if the Sony had contacted it earlier, it would have advised them against cancelling the release of its movie ‘The Interview’.
“I was pretty sympathetic to the fact that they have got business considerations they have got to make. Had they talked to me directly about this decision, I might have called the movie theatre chains and distributors and asked them what the story was,” Obama said. The film about a fictional CIA plot to kill the country’s leader infuriated North Korea.

“What I was laying out was a principle that I think this country has to abide by. We believe in free speech. We believe in the right of artistic expression and satire and things that powers that be might not like,” he said. “If we set a precedent in which a dictator in another country can disrupt, through cyber, you know, a company’s distribution chain or its products, and, as a consequence, we start censoring ourselves, that’s a problem,” Obama said.

“We have got to work with the private sector and the private sector has to work together to harden their sites. But, in the meantime, when there’s a breach, we have to go after the wrongdoer. We can’t start changing how we operate,” Obama said. North Korea, meanwhile, threatened to hit back at the White House and other US targets if Washington sanctioned it for an alleged hacking attack. The country?s top military body, the National Defence Commission (NDC), again denied involvement in the hacking.