As per reports, Rajapaksa said that he was invited by President Maithripala Sirisena to become the prime minister, which he accepted to form a new government and get rid of the politics of hate.

Colombo: Amid the growing chaos over the sacking of Ranil Wickremesinghe, Mahinda Rajapakse who was sworn-in as the new Prime Minister of Sri Lanka issued a statement Sunday saying, “The United National Party-United People’s Freedom Alliance (UNP-UPFA) government came to an end as the result of the UPFA leaving the coalition. I was invited to accept the position of PM with a view of forming a new govt.” Also Read - Sourav Ganguly And Rahul Dravid Inspired Me To Play Cricket: Jos Buttler

As per reports, Rajapaksa said that he was invited by President Maithripala Sirisena to become the prime minister, which he accepted to form a new government and get rid of the politics of hate. Also Read - India retain top spot in ICC Test Team rankings 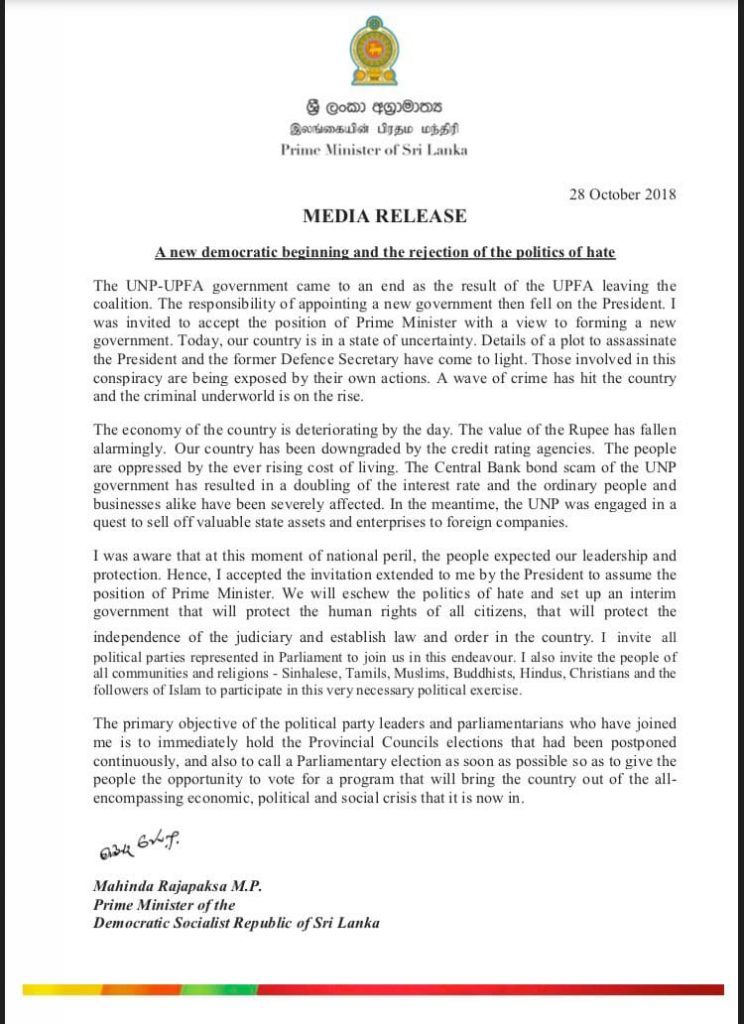 Meanwhile, President Maithripala Sirisena, a while ago said that appointing Mahinda Rajapaksa as the Prime Minister was totally in accordance with the Constitution. For the unversed, Sirisena has also suspended parliament till November 16 after Wickremesinghe, who had termed his sacking as illegal and unconstitutional, sought an emergency session to prove his majority.

At least three people have been injured in Sri Lanka’s Colombo on Sunday when a security guard of parliamentarian Arjuna Ranatunga, former petroleum minister under ousted prime minister Ranil Wickremesinghe’s sacked cabinet, opened fire, as per reports by Reuters.

Police said shots were fired in Colombo at a mob which is loyal to President Maithripala Sirisena after the group tried to take the cabinet member hostage. Earlier today, Sri Lankan speaker of parliament Karu Jayasuriya recognised Ranil Wickremesinghe as the country’s prime minister three days after he was sacked by President Maithripala Sirisena.