These kids are forced to trek a 2600 ft mountain daily just to get to school!

The Atule'er village in China, is such a tiny, remote and sparsely populated village that it has virtually no roads or no means of communication with the outside world except for trekking down a mountain.

In India, we have kids who walk miles daily and through different terrains just to reach the school. And while we feel pity for them, the situation is slowly but definitely changing. There are changes being brought about and schools being set up even in remote areas. But then, there still are little kids walking or cycling long distances daily just to quench their thirst for education. And what if we tell you, there are some who are worse off than these kids walking miles daily? What if you were told that there are kids who actually trek up and down a mountain daily just so that they can get to school? Unbelievable right?

[ALSO READ: This temple can actually predict how good or bad the rainfall will be this year just by the water collected on it’s ceiling!] 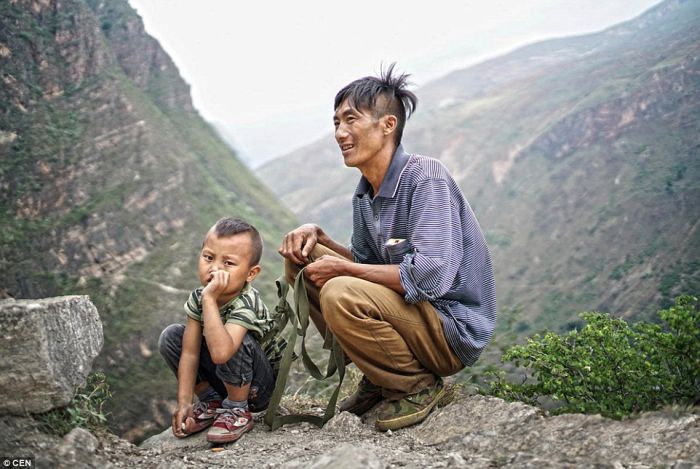 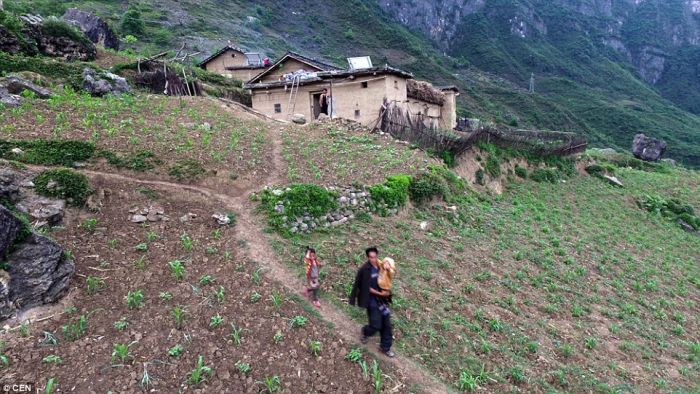 But no, we aren’t kidding you. The Atule’er village in China, is such a tiny, remote and sparsely populated village that it has virtually no roads or no means of communication with the outside world except for trekking down a mountain. You see, the village is situated high up on the cliffs of a 2,624-foot-tall peak and is also known as the ‘Cliff Village’ in China. As the village is so remote and the people there are not many, the government hasn’t really bothered coming up with schemes or developing modes of transport to and from the village. The only way to travel to and from the village is through vine ladders that literally hand down the side of the steep cliff. In some areas, there are no vines either and the people have to just find footholds and trek down.

[ALSO READ: Abdul Wajid, a jobless village boy built a plane to prove that he is not worthless!] 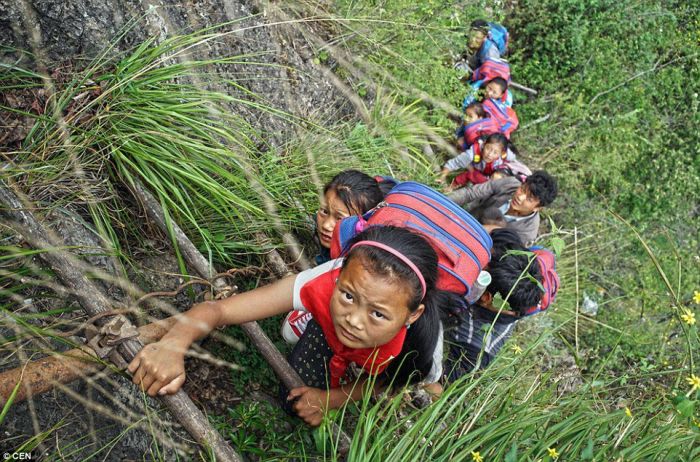 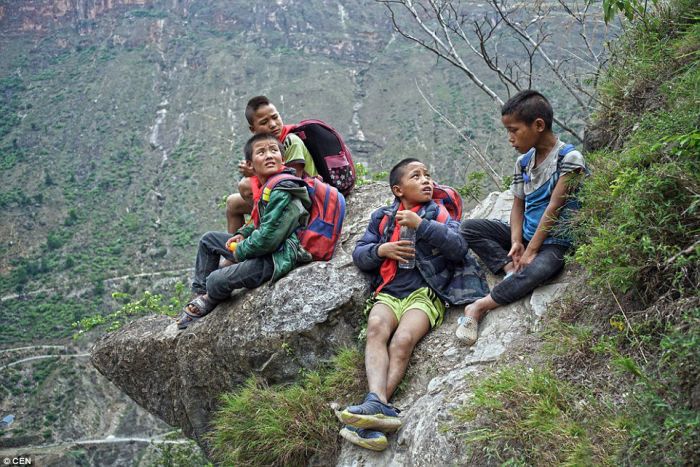 Imagine rock-climbing or climbing 2600ft daily for kids! The school the children of these village go to is situated at the bottom of the cliff. The children, some of them are as small as 6 years old and these little kids who still haven’t learnt the perfect balance make this insanely dangerous journey daily. The situation, needless to say, is terrible and there have been multiple deaths on the walk to and from school. In the past few years, atleast 8 people have fallen off and died. Going to and from school is even worse during the monsoons and the snow. The ladder is straight and steep and completely unsecured. Plus, they are not sturdy or made of metal but natural vine ladders! 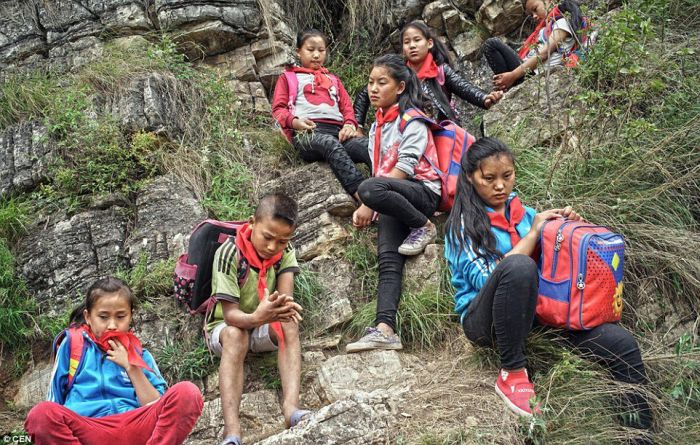 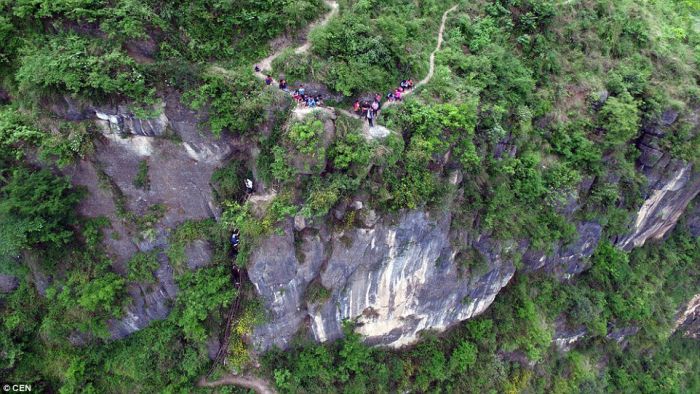 Just a one-way journey takes the kids 2 hours and they need to be accompanied by adults at all times. There are atleast 3 adults who take care and ensure that the kids make the journey safely. Many times, the kids have to pause and take breaks as continuous climbing is too arduous for them. While adults take lesser time, for the children the climb up and down is terrifying and they need constant breaks. Plus, since the children are going to school, they also have to carry heavy bags with all their school materials and water bottles to prevent dehydration on the climb up and down. Needless to say, because of such terrifying conditions, many children are not sent to school and are just asked to stay at home and work. 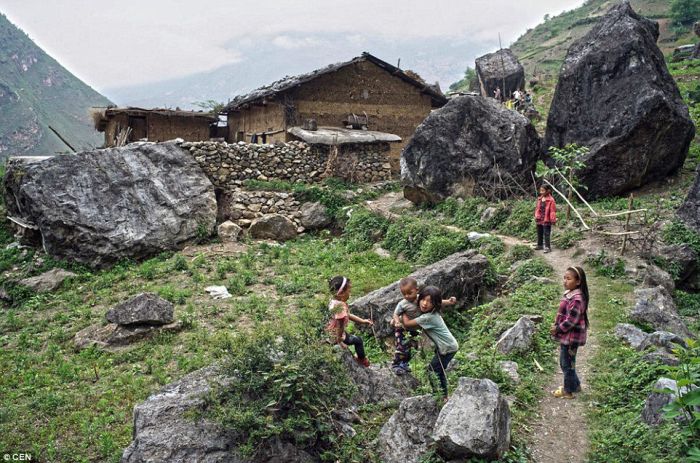 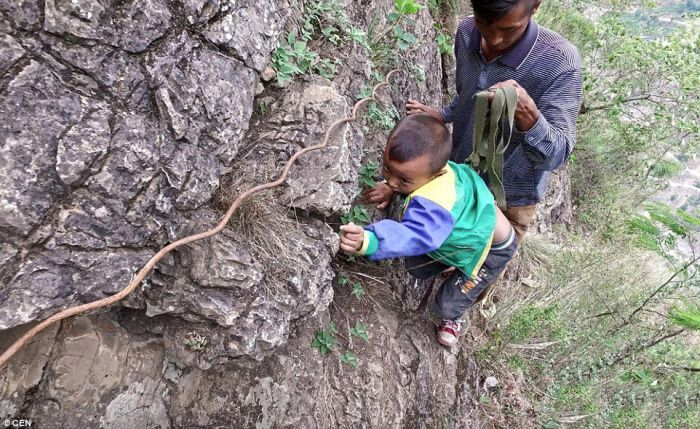 The village itself is self sufficient so the people do not have to venture out too much except for travelling to and from school and at times for some other needs. The land surrounding their village is extremely fertile and the main occupation of the locals is agriculture. The government has provided grants in the form of sheep and other animals but then, despite constant requests from the locals to build the road, the government has been inactive as the cost of construction is too high (60 million yuan – over 60 crore Rs) and the government feels it would not be a wise investment. According to Zhaojue County office secretary Ji Ke Jin Song, “The main problems is that we can easily move the villagers to a nearby city but without their farm land they have no job.’They have good land resources and have a high yield of crops. Building a road to the village would cost 60 million yuan (£6.2 million) which is not cost effective because the number of people is so low.” 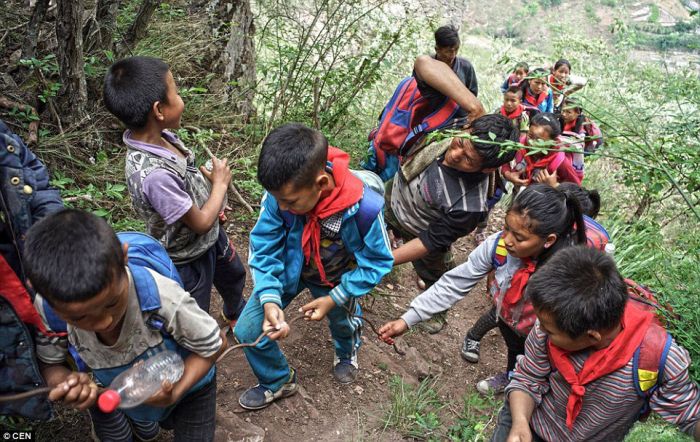 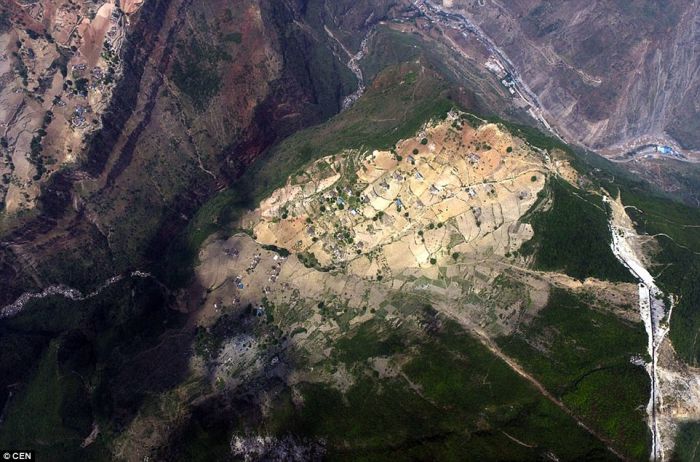 Quite heart-breaking. And hats off to these little children to have the guts and the determination to continue education despite such challenges.