Thousands protest in Moscow against Russian intervention in Ukraine

Tens of thousands of people demonstrated Sunday in downtown Moscow against the war in neighbouring Ukraine and, in particular, against the Kremlin's support for the pro-Russian rebels there 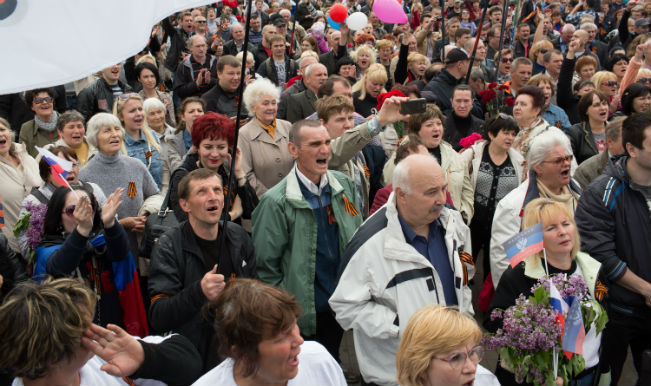 Moscow, Sep 22: Tens of thousands of people demonstrated Sunday in downtown Moscow against the war in neighbouring Ukraine and, in particular, against the Kremlin’s support for the pro-Russian rebels there. “The March for Peace”, a demonstration organised by the extraparliamentary opposition most critical of the Kremlin, kicked off in Pushkin Square, where protesters gathered carrying Ukrainian flags, although Russian flags were also in evidence. Also Read - Ladakh Tension: What Chinese Foreign Minister Told Jaishankar in Moscow During Crucial 2-hour Long Meeting?

The huge march was scheduled to end up on Sakharov Avenue, the site of anti-government protests against election fraud in late 2011. “Hands off Ukraine”, “No to war” and “Russian troops out of Ukraine” were other slogans that could be read on the many posters and signs reviewed one by one by the security forces, something never before seen in this country, Efe reported citing online daily Gazeta.ru.

Some homemade posters with slogans against Putin, such as “Russia without Putin” and “Putin kaputt”, were seized by the police. Chief march organiser Boris Nemtsov, a strident critic of the Kremlin, said that despite the peace memorandum signed last week in Minsk between the Ukrainian government and pro-Russian rebels, the threat of all-out war in Ukraine is increasing.

“The ceasefire in Ukraine is fragile. Putin does not want it, since he would like to create a New Russia from Donetsk and Luhansk to Odessa, unite it with Transdniestria and obtain a corridor to the Crimea,” he said. In recent weeks, the Russian extraparliamentary opposition has denounced the deaths of Russian soldiers on Ukrainian territory, although the Kremlin has insistently denied deploying regular troops in the neighbouring country.