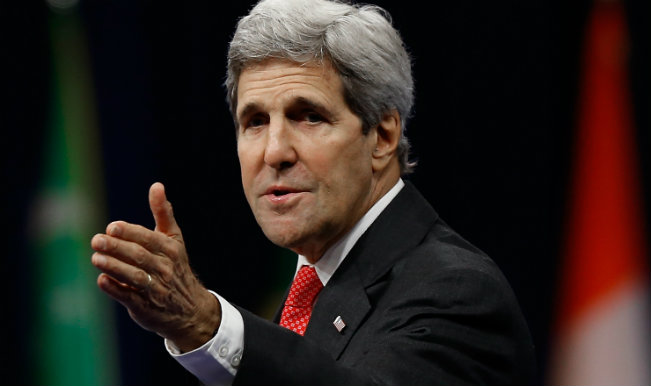 Washington, Aug 30: The US has called for a global coalition to address the challenge being posed by terror group ISIS that has gained control over large parts of Iraq and Syria, threatening to spread to other parts of the world. Asserting that there is evidence that these extremists if left unchecked will not be satisfied at stopping with Syria and Iraq, US Secretary of State John Kerry in an op-ed in The New York Times wrote that air strikes alone will not defeat Islamic State of Iraq and Syria (ISIS). Also Read - Won’t Let Rigged Election Steal Our Country: Trump Takes U-turn After Acknowledging Biden’s Victory

“A much fuller response is demanded from the world. We need to support Iraqi forces and the moderate Syrian opposition, who are facing ISIS on the front lines. We need to disrupt and degrade ISIS’ capabilities and counter its extremist message in the media. And we need to strengthen our own defenses and cooperation in protecting our people,” Kerry wrote. Also Read - US Election 2020 Results: Biden Leads in Pennsylvania, Votes in Georgia to be Recounted

Next week, Kerry and Defense Secretary Chuck Hagel are accompanying US President Barack Obama to the NATO summit meeting in Wales where they intend to talk to European counterparts on this issue.
“The goal is to enlist the broadest possible assistance. Following the meeting, Mr Hagel and I plan to travel to the Middle East to develop more support for the coalition among the countries that are most directly threatened,” he said. In September, when the US will hold the presidency of United Nations Security Council, Kerry said the Obama Administration will use that opportunity to continue to build a broad coalition and highlight the danger posed by foreign terrorist fighters, including those who have joined ISIS.

“During the General Assembly session, President Obama will lead a summit meeting of the Security Council to put forward a plan to deal with this collective threat,” he said.

“Others will help restore not just shattered economies but broken trust among neighbours. This effort is underway in Iraq, where other countries have joined us in providing humanitarian aid, military assistance and support for an inclusive government,” he said.
But no decent country, he argued, can support the horrors perpetrated by ISIS and no civilised country should shirk its responsibility to help stamp out “this disease”.

“ISIS’ abhorrent tactics are uniting and rallying neighbours with traditionally conflicting interests to support Iraq’s new government. And over time, this coalition can begin to address the underlying factors that fuel ISIS and other terrorist organisations with like-minded agendas,” Kerry said.